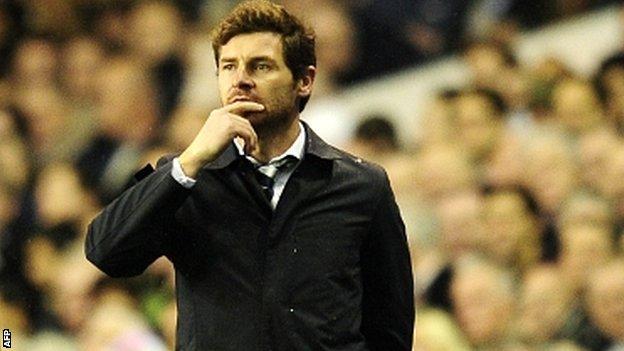 Tottenham manager Andre Villas-Boas has hit back at Harry Redknapp's claim that managing Chelsea is easy.

QPR boss Redknapp recently said of the Chelsea job: "You'd have to be a real dope to mess it up with [the likes of] Eden Hazard, Juan Mata, Frank Lampard."

But Villas-Boas, who was sacked by Chelsea after nine months in charge, said: "You have to be able to access a club like that to experience it."

Redknapp, who spent four successful seasons at Tottenham before being sacked in June, made his comments about the current Chelsea interim manager Rafael Benitez before QPR's 1-0 victory at Stamford Bridge on 2 January.

Some also interpreted the remarks as a slight on Villas-Boas, who succeeded Redknapp at White Hart Lane in the close season.

After an inconsistent start to his reign at Tottenham, Villas-Boas has guided the club to third in the Premier League with seven wins in their last nine matches.

Chelsea fans reacted angrily to the appointment of former Liverpool boss Benitez and their unrest has increased in recent days with news that Lampard will not be offered a new contract, plus a 2-0 first-leg defeat at home to Swansea in the Capital One Cup semi-final.

"I was booed," Villas-Boas said of his time at Stamford Bridge. "It's a consequence of the demands of the job.

"Chelsea is a high-profile club where media attention is high and everything is scrutinised and it's a different type of environment.

"This is a high-profile club but with different circumstances, different players, and different objectives and not so much media attention."

Villas-Boas was still at Chelsea when the Blues drew 1-1 with Redknapp's Spurs in December 2011, but asked if he has had any discussion with his predecessor he said: "I've never spoken to him."

Asked for his opinion on the 35-year-old Portuguese, Redknapp said: ''I have no problems with him, good luck to him, he's doing excellent. I will shake his hand and invite him in for a drink after the game, he seems a nice guy."