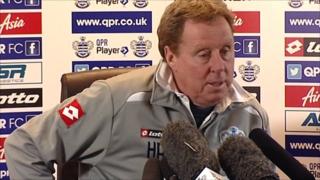 Redknapp not motivated by revenge

Harry Redknapp says QPR's match against former club Tottenham is "just another game" and states he is not motivated by any sense of revenge.

The QPR manager also confirms the club are still active in the transfer market having made a rejected offer for West Brom's Jonas Olsson, and believes signing either Danny Graham from Swansea or William Gallas from Spurs will be "difficult" during the transfer window.

Despite their surprise 1-0 win at Chelsea, QPR remain bottom of the Premier League and five points adrift of safety at the halfway point in the season.