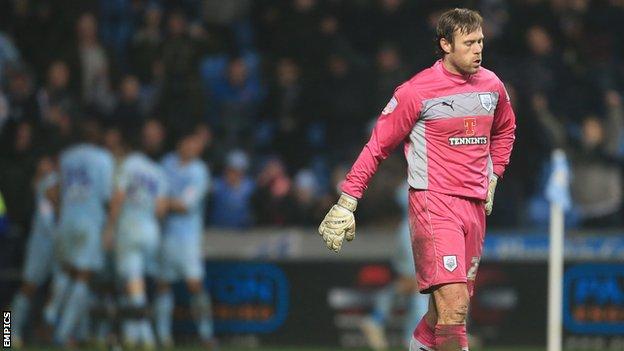 Steve Simonsen could be out for "weeks and maybe months" with a knee injury picked up in Preston's Johnstone's Paint Trophy exit at Coventry.

The 33-year-old goalkeeper was injured in the final minutes of the 3-2 loss.

Manager Graham Westley told BBC Radio Lancashire: "He suffered what we think is a cartilage injury that will keep him out for weeks and maybe months."

Having made all three substitutions, Simonsen was forced to continue in goal for North End at the Ricoh Arena.

Westley's side led 2-1 at the start of five minutes of stoppage time, during which a struggling Simonsen conceded twice to end Preston's hopes of a Wembley final.

Westley added: "The players wanted to go through. They want to do well for the football club so badly.

"Did we see it out in a way that a side is winning consistently would do? No. Did we own the ball well enough? No. Are there were mistakes that we made? Of course there are.

"One or two moments of naivety have cost us in added time. What doesn't kill you makes you stronger."

Thorsten Stuckmann is set to replace Simonsen in goal for the League One fixture at home to Walsall on Sunday.