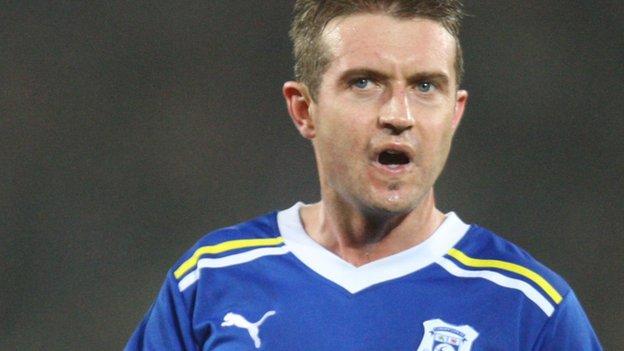 Cardiff City are hoping to send out midfielder Stephen McPhail on a short-term loan.

The 33-year-old returned to action on Saturday for the first time since the opening day of the season.

McPhail has been hampered by injury and also suffers from a medical condition that requires continuous treatment.

"There's a chance he might go out on loan, if that opportunity comes up, to give him 90 minutes regularly," said Cardiff manager Malky Mackay.

"With the number of midfielders we've got, that's not probably going to happen here in the immediate future. It would only be short term."

Although he hopes to prolong his playing career, McPhail wants to continue his association with Cardiff as a coach even if he decides to hang up his boots.

"He probably needs to play regularly at the moment just to see where he's going to be next season in terms of his career," added Mackay.

Cardiff, though, will resist requests to allow another midfielder on the fringe of the first-team squad to leave on loan.

Joe Ralls, 19, has made only six appearances this season and only one start in the Championship, but Mackay has already fended off interest from rival clubs to take the academy graduate.

"Young Ralls has come on leaps and bounds. He's got a great attitude," said Mackay.

"He's someone I'm really excited about for the future of Cardiff City. I need him round about my squad at the moment.

"I've had bags of enquiries about Joe Ralls to go out on loan but right now he's needed around the squad.

"We have a place for him but right now it's to be round about the squad."