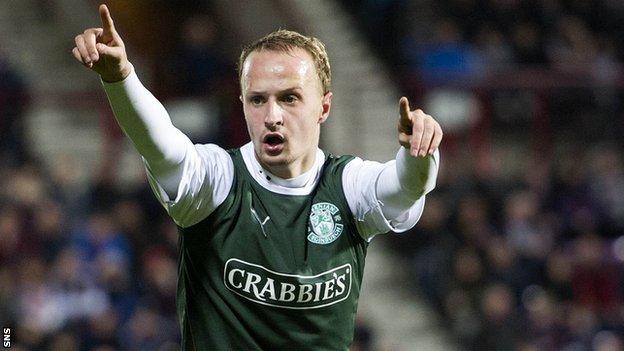 Wolves say that striker Leigh Griffiths is "likely to remain at Hibernian" for the remainder of the campaign.

The player's loan agreement was due to expire after the Scottish Premier League clash with Dundee on 19 January.

The 22-year-old had trained at Molineux on Tuesday and Wednesday to give new manager Dean Saunders the opportunity to assess the Scotland international.

But the Championship club broke the news in a statement condemning Griffiths for an offensive tweet.

"The player is currently on loan at Hibernian FC and is likely to remain there for the rest of the season," said a Wolves spokesman.

"He is, therefore, subject to the disciplinary procedures of Hibernian FC and those of the Scottish Football Association."

Hibs also released a statement on the player's use of Twitter, saying: ''The player will be subject to a disciplinary process which will be a private matter between the club and the player.

''The player accepts the language he used was totally unacceptable and has apologised for what he said.''

Griffiths joined Hibs in August 2011, after he had signed for Wolves from Dundee, with the loan extended to the end of that season.

He returned to Easter Road in July 2012 and has scored 14 goals for the Edinburgh club this term.