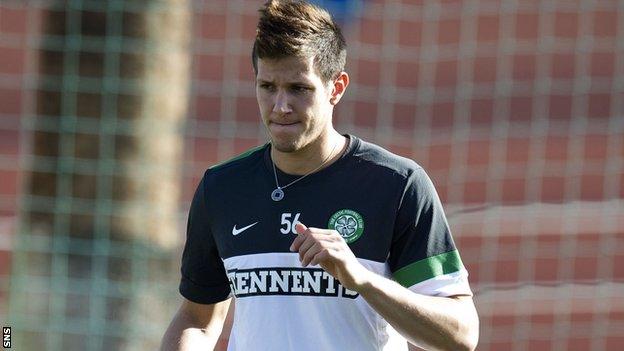 Celtic's newest signing Rami Gershon has revealed he jumped at the chance to join Neil Lennon's side.

The Israeli defender joined from Standard Liege on loan until the end of the season, with Celtic then having the option to make the deal permanent.

"Celtic are a very big club and even when I was young I always knew about the club," said Gershon.

"So when I got the opportunity to come I didn't need to think twice about it - I wanted to come."

I didn't need to think twice about it.

The 24-year-old, capped 10 times by Israel, is currently getting to know his new team-mates at Celtic's training camp in Marbella.

"Everything excites me about joining Celtic," he told Celtic's official website.

"And it's always exciting to come to a new place - the fact I have to change country, make new friends and meet new staff.

"They also have a lot of history in European competition."

Left-sided centre-back Gershon has Champions League and Europa League experience from his time in Belgium with Standard Liege.

And he already has his eye on Celtic's last 16 tie with Juventus in February.

"I've played in the Champions League before with Standard but not after the group stages, so this will be a good adventure," said Gershon.

"All my thoughts now are working and succeeding with Celtic - this is my goal.

"I saw the game against Barcelona and it was a really good game.

"I am very happy and excited at this opportunity and I'm ready to start."