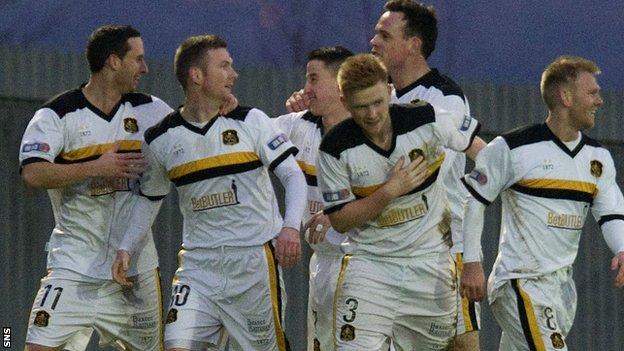 Bryan Prunty scored his seventh goal of the season as Dumbarton picked up their first home win of the season to stun promotion hopefuls Partick Thistle.

The hosts took the lead in the 21st minute when visiting defender Conrad Balatoni turned the ball past his own goalkeeper from six yards out.

Dumbarton goalkeeper Jamie Ewings went down injured in the closing stages of the first half and was replaced by Stephen Grindlay.

The Sons doubled their lead in the 63rd minute when Prunty tapped in from close range after good work from James Lister.

The visitors offered very little going forward in the second period and had very few notable chances to reduce the deficit, the best of which fell to Paul Paton, who struck from 10 yards out only to see his stoppage-time shot blocked by defender Nicholas Devlin.