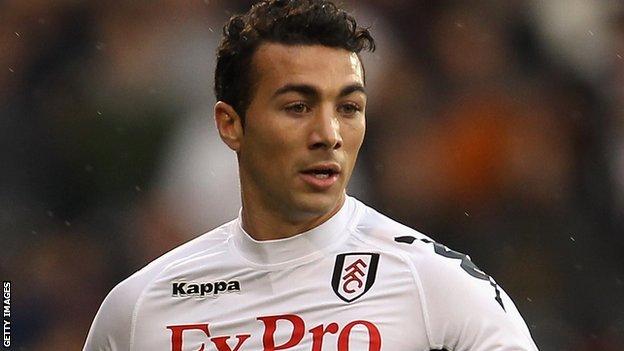 Reading have completed the signing of defender Stephen Kelly from Fulham for an undisclosed fee.

Republic of Ireland international Kelly, 29, has signed a two-and-a-half-year deal at the Madejski Stadium.

Kelly is Reading's third signing of the transfer window, following the arrivals of Daniel Carrico and Hope Akpan.

"He's up for the fight, up for the battle, he's hungry, he wants to do well and I know he'll be successful for us."

Speaking before the deal went through, Fulham manager Martin Jol said Kelly would be the only player leaving the club this month.

Kelly joined Fulham on a free transfer from Birmingham in 2009 and made 71 appearances for the Cottagers.

Fulham finished ninth in the Premier League last season but sold midfielder Mousa Dembele and forward Clint Dempsey to Tottenham in the summer.

Jol brought in Dimitar Berbatov, Hugo Rodallega, Mladen Petric and Kieran Richardson, but his side sit 13th, six points above the relegation zone.

"We are very close [to making signings] but there are so many other teams involved," added Jol.

"If you want a good player other teams try to jump on it, so you have to be very inventive and we don't have a lot to spend.

"We try to get one or two players in to strengthen the squad."

"If Tom is fit he is always in the back of my mind," Jol explained. "I can't say Tom is not on my list because I like him."