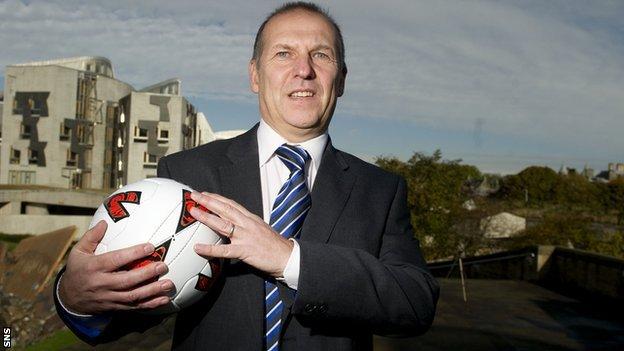 Scottish football fans have "reservations" about proposed changes to the country's league structure, according to a fans group.

But Supporters Direct Scotland's Paul Goodwin has welcomed the opportunity to be involved in the process "to ensure maximum transparency".

Scotland's three governing bodies have jointly proposed that the current make up of four leagues is altered.

Under the plans, there would be two divisions of 12 and one of 18.

However, midway through the season the top two leagues would be split into three sections of eight.

Should the proposals be accepted by senior clubs, the SPL and SFL would be replaced by a single entity.

When announcing the proposals, Scottish Football Association Stewart Regan responded to a question about fans' desire for a bigger top flight by saying he hoped to work with Supporters Direct to explain the rationale for the 12-12-18 plan.

"Recognition that change was required has to be welcomed by everyone involved in the game both now and in the future.

"I attended a meeting with the chief executives of the Scottish FA, Scottish Premier League and Scottish Football League and was encouraged that their members are committed to change for the good of the game.

"I was also pleased to receive assurance that any new single league body will work with SDS to ensure maximum transparency to supporters on all future decisions and to ensure that fans' views are heard.

"SDS also believes that other key stakeholders such as the Professional Footballers Association in Scotland and the Scottish League Managers Association must also be involved so that all voices are not just heard but are part of the decision-making processes from now on.

"Whilst welcoming the possibility of a more equitable monetary distribution, I reiterated that many supporters have reservations over the proposed league structures but welcomed their willingness to work with us going forward.

"We also urged the league bodies and, in particular, the member clubs to consult closely with supporters to ensure a fuller understanding of any proposed new league format."