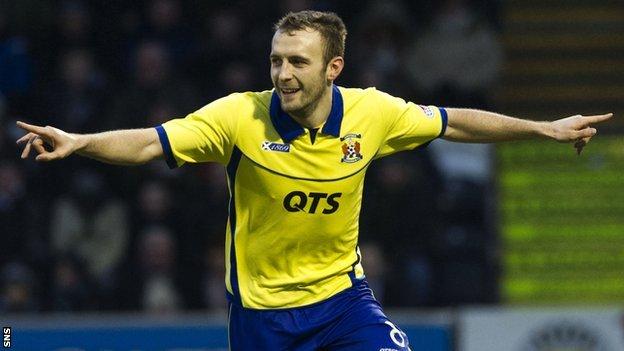 Liam Kelly admits it was "hard" to leave Kilmarnock and thanked the club for how they had supported him in recent times.

In March, Kelly lost his father on the same day he had helped Killie win the Scottish Communities League Cup.

And the 22-year-old said of the Rugby Park outfit: "The club's been fantastic. All the staff there have been brilliant."

Kelly's performances in Kenny Shiels' team this season brought him to the attention of City, and also led to a Scotland debut in November.

"Kenny Shiels has been fantastic for me," Kelly told BBC Radio Scotland. "He's helped me improve as a player.

"Kilmarnock's a fantastic club to be at, there's fantastic people in and around the club.

"I can't thank them enough for what they've done for me in the past years, especially in the year just gone by.

"It was hard to leave the club but I think the time was right. I left on good terms and I wish everyone well and I'm sure they wish me well.

"They've got a fantastic squad, good management staff and I'm sure they'll move up the league and, hopefully, have a good cup run as well."

Kelly is now savouring the prospect of Championship football.

"I played over 100 games for Kilmarnock," he added. "I just felt like the time was right to move on and seek a new challenge.

"I's going to be a big challenge coming down here and playing in the Championship and I'm certainly looking forward to it and hopefully I'll progress as a player.

"The aim is to pick up as many points from the remaining games that we've got. I'm sure there's enough talent in the squad to achieve that.

"And if we do that then I'm sure we'll finish up in a good league position and away from the relegation zone."