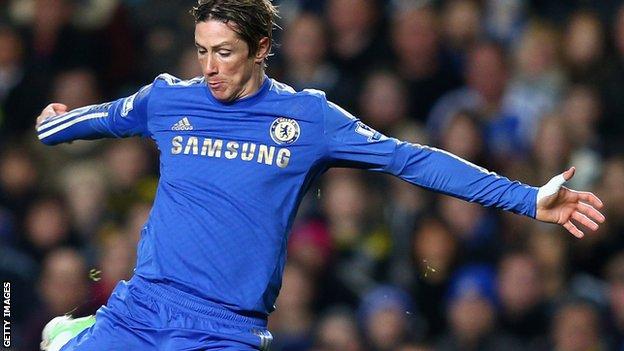 Fernando Torres has been backed to improve on his current form by Chelsea interim manager Rafa Benitez.

The Spanish striker has not scored in his four appearances since Chelsea's 8-0 win over Aston Villa on 23 December.

Benitez revealed that Torres played in Chelsea's Capital One Cup defeat by Swansea despite suffering from illness.

"Fernando had a stomach bug and Demba Ba had a niggle. The club doctor was giving Fernando tablets, but I told him he had to play," said Benitez.

Torres has scored half of his 14 goals this season since Benitez succeeded Roberto Di Matteo, and his former manager at Liverpool thinks he can get many more.

"The main thing a player can do is to concentrate on his job and Fernando is really, really trying," Benitez declared.

"If he scores goals again it will be easier. Fernando concentrated on trying to do his job [despite his illness] and that is the sign of a great character.

"He is trying to give his best. In training every day he is giving 100% every session. Because the club paid big money, everybody is expecting a relation between money and goals to be easy."