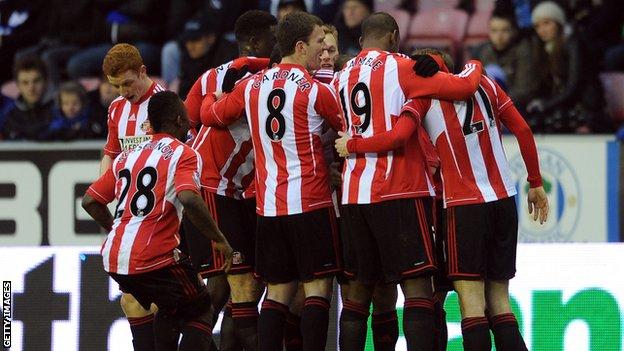 Steven Fletcher scored twice as Sunderland came from behind to win a five-goal thriller and send Wigan Athletic into the bottom three.

David Vaughan's own goal gave the Latics the lead when he diverted Ronnie Stam's shot into the net.

Craig Gardner levelled with a penalty after James McCarthy handled, and Fletcher made it 2-1 from close range.

Fletcher found the top corner with an excellent strike, with Angelo Henriquez heading a consolation for Wigan.

Eighteen-year-old Henriquez, on loan from Manchester United, set up a grandstand finish at the DW Stadium.

But Wigan were once again undone by Fletcher, who has now scored six goals in seven Premier League games against them.

While Sunderland's recent problems appear behind them, Roberto Martinez's side are in trouble after another failure in front of their own fans.

The Spaniard has seen his side win one of the last 10 Premier League games and their poor home form is a cause of real concern.

This was the fifth straight top-flight game they have failed to win at the DW Stadium. In addition, Wigan are the only Premier League club yet to keep a clean sheet at home this season.

Away day joy for Sunderland

Sunderland scored three first half goals in an away match for only the second time in Premier League history and the first since 1996 - when they won 4-1 at Nottingham Forest, with all four goals coming in the opening 45 minutes.

They have been hurt by injuries to key defenders and the imminent return of Antolin Alcaraz cannot come soon enough. But it may require more than the Paraguay international to fix Wigan's problems.

Martinez's men were gifted a fourth-minute lead when Stam's mis-hit shot - following an exquisite pass by Gomez that allowed Jean Beausejour to whip in a low cross - struck Vaughan and flew into the net.

But two goals in the space of three minutes turned an entertaining match upside down.

Backed by 4,800 travelling supporters, the Black Cats were clearly starting to feel at home and they went ahead when Fletcher struck again from close range. Al Habsi kept out the Scot's 20th-minute close-range header from a cross by the lively Alfred N'Diaye - making his first top-flight start - but the striker followed up to score.

While Sunderland were commanding and confident, Wigan stuttered. They fell further behind before half-time when £12m signing Fletcher found the top corner after collecting a pass from Adam Johnson on the edge of the area.

The hosts rallied after the interval, Shaun Maloney twice going close along with Maynor Figueroa.

Substitute Henriquez did find the net when the Chilean headed home Maloney's cross but the damage had been done and Sunderland celebrated a fourth win in six league games.

Wigan boss Roberto Martinez on his team's top-flight status: "We never take anything for granted.

"If we had done that we would never have had eight seasons at this level. Today we weren't good enough defensively for 30 minutes. We need to rectify that.

"Ivan Ramis' injury last week cost us today's points. That is something I need to correct."

Sunderland boss Martin O'Neill: "Fletcher was fantastic. It was not just his goals but also his whole centre forward play.

"We took great heart from his performance. We've had to show a lot of fight and determination.

"Wigan threw a lot at us but and were never out of it. It was all hands to the pump at the end and I am delighted with the result."