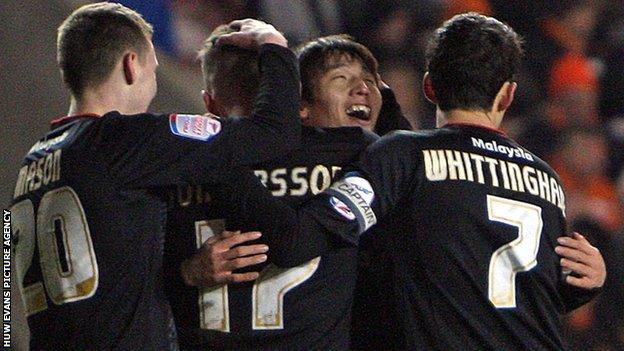 Cardiff City opened a 10-point lead at the top of the Championship with a hard-earned win over managerless Blackpool at Bloomfield Road.

Tommy Smith secured victory for the Bluebirds with a fiercely struck volley in the 64th minute.

Cardiff had opened the scoring through Kim Bo-Kyung after a scoreless first half, Gary Taylor-Fletcher equalising with a diving header on the hour.

It was the fourth consecutive away win for Malky Mackay's team.

Blackpool could be forgiven a sense of deja vu as this was a third consecutive 2-1 defeat, and they are now without a victory since their 2-0 win over Blackburn on 15 December.

But Cardiff City will fly off for warm weather training in Dubai on Sunday in good spirits with a comfortable cushion over Leicester City, Friday night victors over Middlesbrough.

Blackpool caretaker Steve Thompson made four changes, Bob Harris, Craig Cathcart, Ludovic Sylvestre and Tiago Gomes coming in for Stephen Crainey, Alex Baptiste, Neal Eardley and Nathan Ecclestone, while Mackay was forced to leave out Craig Bellamy with a stomach bug and defender Ben Turner because of a hamstring strain.

The Bluebirds had an early penalty appeal turned down by referee Michael Naylor when Joe Mason went down under a challenge from Kirk Broadfoot but it was Blackpool who created the first clear-cut chance.

Both sides were battling with an uneven, sandy surface, with Blackpool posing problems for the leaders as Taylor-Fletcher and Nathan Delfouneso probed effectively.

And the home team had a good penalty shout when Taylor-Fletcher's cross struck Andrew Taylor on the elbow, but again Mr Naylor waved play on.

Cardiff's best chance of the half came just before the interval when Tommy Smith's close-range shot was turned over by Matt Gilks in the Blackpool goal but the Welsh club finally took the lead in the 54th minute.

Smith's left-wing cross was partially cleared before Arun Gunnarsson's shot struck a post, and Kim followed up to blast the ball past Gilks.

Blackpool were level on the hour, Gomes sending a teasing cross into the area where Taylor-Fletcher barged past Andrew Taylor to score with a diving header.

But within four minutes City were ahead again. Kim led a counter-attack after a Blackpool corner, freeing Taylor, who lost the ball in the Blackpool area.

Again it was only partially cleared and met on the volley by Smith, whose shot flew into the net after taking a deflection off Craig Cathcart's head.

It was Smith's first goal for the club in an injury-troubled season.

Ince continued to threaten for the hosts, twice forcing Marshall into saves with long-range shots. But Cardiff kept the Tangerines at arm's length in the the closing stages to cement their position at the top of the table.

Cardiff City manager Malky MacKay told BBC Radio Wales: "I'm absolutely delighted, it's a tough place to come, it's never been easy and I thought we were excellent tonight.

"It's out fourth away win in a row and it shows the steeliness and determination of our team. I'm delighted for everyone, it's a very well earned three points.

"We just tactically changed slightly in the second half, we just went on to the front foot a little bit more in terms of winning first and second balls because I knew if we did we could certainly break on the counter and hurt them."