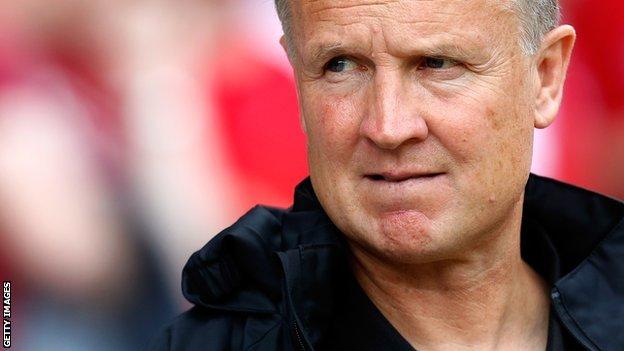 The home side struggled to make a breakthrough against the Championship's bottom club and the disgruntled home fans made their feelings felt.

But Ross Barkley crossed for Ross McCormack to head past keeper Tom Heaton for the eventual winner.

It was a rare moment of quality in an otherwise uneventful game, leaving the Robins seven points adrift of safety.

Leeds secured a sixth home league win on the trot and they will hope they can build on it to make a concerted effort to challenge for a play-off spot.

O'Driscoll has taken over at Ashton Gate following his recent departure as manager of Nottingham Forest.

He had led Forest to a 4-2 win over Leeds on Boxing Day before his City Ground exit, but could not earn another win over the Elland Road side.

Cole Skuse could have given City the lead but shot off target with an effort from the edge of the area.

Leeds keeper Paddy Kenny kept his side on level terms with a save after Byram sliced Richard Foster's cross towards his own goal.

But the home side eventually produced a threat and on-loan Everton teenager Barkley set up McCormack for the goal City failed to recover from.

"I thought if anyone was going to score today it was Ross McCormack. It was a cracking goal, he deserved it and he covered lots of ground.

"He was a fraction away from putting one in at the end of the first half and looked very sharp.

"We knew it would be hard work because they have a new manager and are fighting for their lives. We got a grip at half-time and were a lot more positive in the second half.

"Unfortunately, you can't please everyone, even when you have won six in a row in the league at home. For me, the glass should be half full, not half empty."

"I've had three days with them and I thought they deserved a 'well done'. You don't get many chances to say that when you are still bottom of the league.

"We wanted them to be well organised, hard to beat and bright in the opposition's half, which they were.

"I was pleased with their application but disappointed with the result. They are an honest bunch and I will just give them some direction.

"You have to be realistic and we are in a dangerous position, but if we can maintain the level we set today and add a couple of players there is no reason why we can't give ourselves a chance of retaining Championship status."