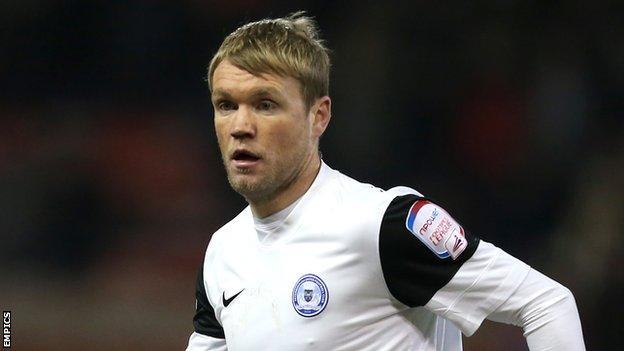 He struck with 11 minutes remaining just as Steve Bruce's side appeared on course to back into the automatic promotion places.

Leicester's 1-0 win over Middlesbrough on Friday had dropped Hull to third.

Joe Newell's first-half own goal had given the Tigers the lead only for McCann to score from the spot after James Chester fouled Tommy Rowe.

The result spared Peterborough a 10th home league defeat and was the club's first draw at London Road since 21 April 2012.

Dwight Gayle was unable to add to the 10 goals he has scored for Peterborough since his arrival on loan from Dagenham & Redbridge at the end of November when he headed wide after eight minutes. Jaanai Gordon-Hutton and Robbie Brady went close for the hosts soon after.

Hull threatened with Liam Rosenior, Nick Proschwitz and Paul McShane all heading at goal before the half-hour mark but Posh did not heed the warnings.

The visitors snatched the lead on the half-hour, Newell inadvertently diverting the ball beyond his own goalkeeper Robert Olejnik after a whipped cross by Robert Koren.

But the hosts equalised from the penalty spot after Rowe was brought down by Chester.

Gayle wanted to take the spot-kick, but McCann took the ball off him and stroked his shot past Hull goalkeeper David Stockdale.

Peterborough survived a late scare when McShane's diving header had to be parried away by Olejnik.

Peterborough manager Darren Ferguson: "A point was the least we deserved and I wouldn't have been surprised if we had gone on to win after getting ourselves level.

"Home form is crucial when you are fighting to stay up and I know for a fact that the relegation battle is going to go right down to the wire."

Hull City boss Steve Bruce: "You're always disappointed to be pegged back in the final few minutes of a match, but in all truth I don't think we deserved anything more than a point.

"We gave away a soft penalty which I have absolutely no complaints about, but I can't be too disappointed to be sat third in the league with only goal difference keeping us out of the automatic promotion places."