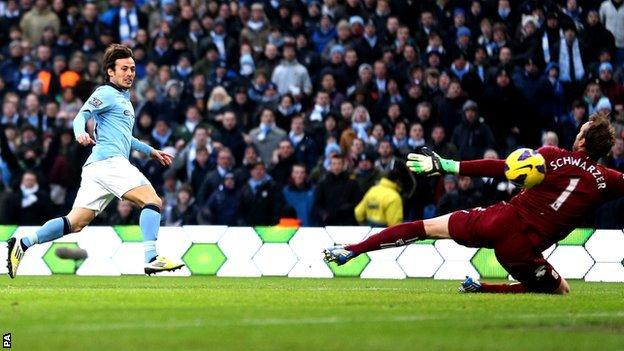 David Silva scored twice as Manchester City saw off Fulham to close the gap on leaders Manchester United to four points, for 24 hours at least.

United can restore their seven-point advantage when they go to Tottenham on Sunday but City succeeded in their mission of putting pressure on their title rivals before their tough test in north London.

Fulham have won only twice away from home in the Premier League all season, and have kept only one clean sheet in their past 15 league matches.

This was a straightforward enough victory for the champions, rather than the scintillating one it threatened to be when Silva put his side ahead after just 95 seconds, but the three points were what mattered for Roberto Mancini's men.

Fulham rarely posed a serious threat other than when Steve Sidwell headed against the post in the first half but City did not make the points safe until Silva struck his second in the 69th minute.

The Cottagers' form - two wins in their last 14 games - had suggested an easy afternoon for the hosts, who certainly made the perfect start.

They opened the scoring after James Milner darted in to win possession, allowing Edin Dzeko to fire in a 25-yard shot that Mark Schwarzer could only parry into the path of Silva.

Martin Jol's side are not known for their resistance, especially on the road, but against expectations they dug in after going behind.

With City bogged down in midfield, and careless in possession, the Cottagers began to venture forward and fired a succession of crosses into Joe Hart's area.

The home side were still threatening and had glimpses of goal when Dzeko and Carlos Tevez both brought routine saves out of Schwarzer.

But Fulham came within inches of levelling when Damien Duff's cross was met by Sidwell, who was under pressure from Pablo Zabaleta but still managed to send the ball looping against the outside of the woodwork.

On the touchline, Mancini's frustration was obvious, and the home fans were also becoming exasperated by City's wasteful play.

City badly needed a second goal but continued to give the ball away in promising positions, although Dzeko did go close before half-time with a whipped shot from Tevez's pull-back.

Things improved in the second half, with the hard-working Tevez firing over and Kompany going close with a header from a corner.

Fulham were by this stage offering little at the other end but still retained hope of snatching a point until Silva made sure of his side's victory.

The Spanish playmaker started the move that led to the goal, and finished it too - running on to Tevez's clever dummy from Gael Clichy's pass to dink the ball over Schwarzer.

He should have completed his hat-trick moments later when Tevez sent him running clear, but this time he rolled his shot wide.

Even so, there was no way back for Fulham, and City could afford to miss more chances before the end - most notably a howler from Dzeko, who lifted the ball over the bar from six yards out.

"David Silva had a great time last season and his recent performances have been very good. He does great things for us, but he has missed the goals his performances deserve. He got two today, and should have had three.

"Towards the end we could have got three or four, and a clean sheet is great."

Fulham boss Martin Jol: "We made plans and train to do whatever we want, but to concede in the second minute is a horrific scenario. At 1-0 down it could have been a horrible day.

"After they scored we did better, but the final ball wasn't great. If you want something here at Man City you need a bit of luck and quality, but we couldn't find that special moment. That was disappointing.

"We could have hurt them because they didn't score their second until the 70th minute and this wasn't Man City at their best."