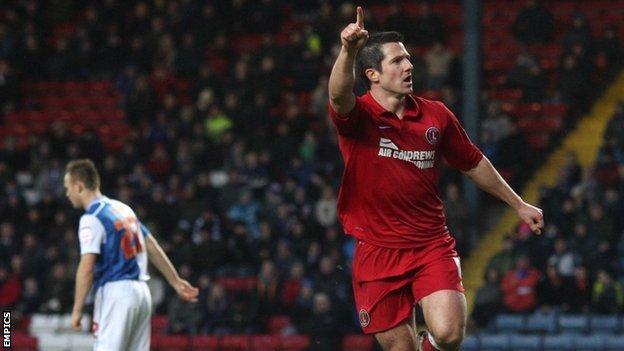 A long-range half-volley from Dale Stephens gave Charlton a deserved lead and Rovers' Martin Olsson cleared off the line from Lawrie Wilson.

The victory sees Chris Powell's Addicks leapfrog Blackburn to go 12th in the table, while the pre-season promotion favourites lie 10 points off the play-off places in 14th.

Charlton's victory was the first time they have picked up points at Ewood Park since a 1-0 victory in the Premier League in October 2003.

Owners Venky's were in attendance for Appleton's Ewood Park debut and received a predictably hostile greeting from the home support.

Appleton stuck with the same Blackburn XI that drew 1-1 with Wolves last Friday at the end of a four-game unbeaten stretch under caretaker boss Gary Bowyer, while Charlton were also unchanged.

Simon Vukcevic and Ruben Rochina were off target with speculative efforts for Blackburn during the opening exchanges as Charlton failed to make an early impression.

But the visitors found an opener on 26 minutes when full-back Chris Solly burst clear of Colin Kazim-Richards down the right and his cross was only partially cleared by Olsson, leaving Stephens to find the top corner from 25 yards.

Rovers, booed off the pitch at half-time, responded three minutes after the restart when Rhodes planted a diving header from Kazim-Richards's right-wing cross beyond the outstretched Ben Hamer into the bottom-left corner.

The Addicks got their winner when Kermorgant looped a header home from Pritchard's first-time cross and comfortably saw out the remaining 25 minutes.

Blackburn boss Michael Appleton: "I think the atmosphere in the stadium was a strange one. I'm sure the supporters just want to see a committed performance from the players. I think they huffed and puffed today but I'm not sure how committed they were once we conceded the second goal, which was a disappointment.

"There's no time to shirk your responsibilities. We're professional people, whether you're manager, coach or a player. You've got to take the responsibility that goes with it."

Charlton manager Chris Powell: "We've been very positive away from home this season.

"We've had some good results on the road and the team warranted their places after their performances last week. We were very positive in our mindset and I think it showed today."