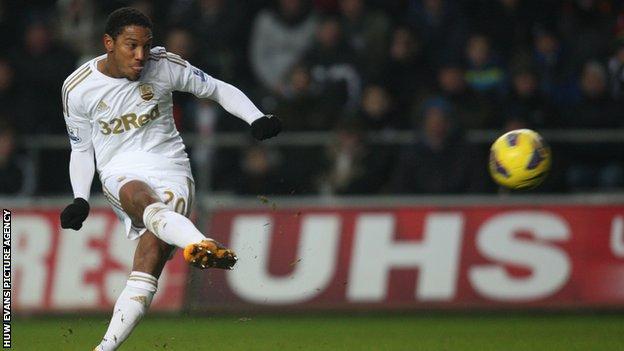 After a goalless first half Davies broke the deadlock when he fired a low shot past Asmir Begovic.

De Guzman doubled the lead with a curling free-kick before completing a fine Swans move with an accomplished finish to make it three.

Michael Owen's late header, his first goal for Stoke, was a mere consolation for the visitors.

Stoke offered very little but the win will give Swansea confidence for their Capital One Cup semi-final second leg against Chelsea on Wednesday.

The Swans made a probing start to the game with Michu firing high and wide after being teed up by Itay Shechter, who capitalised on a mistake by Robert Huth.

Stoke found it hard to break out of their own half during the early exchanges but gradually improved.

Despite their promising start the home side did not trouble Asmir Begovic, with Ki's long-range effort clearing the crossbar.

In reply Peter Crouch, making his first league start since November, volleyed over the bar.

Matthew Etherington found himself in the area after playing a neat one-two with Charlie Adam but the winger fired into the side-netting.

The previous three Premier League meetings between the sides had ended in 2-0 home victories, including Stoke's win at the Britannia Stadium in September.

Swansea upped their game as Pablo Hernandez and Davies saw efforts deflected, and Ki turned an effort wide of the post.

The best move of what had been a forgettable first half saw Michu head wide from six yards following Angel Rangel's neat cross from the right. And De Guzman missed another excellent opportunity when he fluffed his shot after Wayne Routledge's cross found him in a packed penalty area.

De Guzman again had his sights on goal early in the second half but the Dutchman blazed his effort over the bar.

The Wales international showed strength and composure as he beat two players before coolly slotting the ball past Begovic.

Michael Laudrup's side were now fully in control and when Michu was brought down on the edge of the area by Adam, De Guzman curled the free-kick into the net, beyond a stranded Begovic.

Another substitute, Cameron Jerome missed a golden chance to reduce the deficit when he put the ball over from a yard out.

The hosts completed the win when De Guzman finished off a sweeping move with an accomplished finish 10 minutes from time after receiving a pass from Danny Graham.

Owen scored with a header from six yards for his first goal in Stoke colours but it was too late to prevent the Swans moving four points clear of their visitors and into eighth place in the Premier League.

"We dominated from the first minute. In the first half Stoke had to defend very deep and the only bad point was we did not score from the two or three good chances we had.

"In the second half we continued, but I knew we needed something special to score the first goal. If we scored the first goal I was sure we would win."

"We were second best from the first whistle to the last. Swansea were better and deserved to win. I've got no excuses.

"You have good and bad days in football and this was a bad day for us. We looked a yard short all over the pitch. We looked sluggish and sloppy.

"Whether it's the fact we played [Crystal] Palace in extra-time [in the FA Cup] and had to travel down early and had not been able to do anything for two days because of the snow, I don't know. But it wasn't us today."