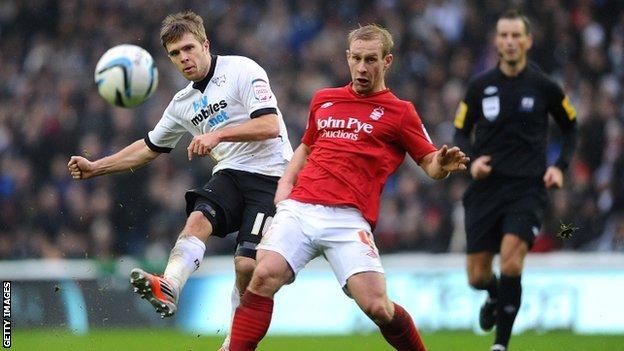 Derby striker Jamie Ward returned from injury to score a second-half goal and earn a draw against Nottingham Forest.

Forest's Simon Cox hit the bar before his side took the lead when Chris Cohen mis-kicked Billy Sharp's cross but tucked in at the second attempt.

They could not build on that and Forest finished the stronger side with Sharp firing wide late on.

The point for Alex McLeish's side ended a three-game losing streak to their East Midlands rivals, but they had opportunities to win the game against a less experienced Derby side.

Forest were not totally dominant in a scrappy game, but they were more of an attacking force and had more possession in midfield as they moved to within two points of the play-off places before Saturday's later kick-offs.

Ward, who last started a game for Derby in the reverse fixture in September, was his side's biggest threat and when he was replaced after his goal, the thrust went out of the hosts' play.

He saw a free-kick deflected just wide of the post early on, but Nigel Clough's side failed to support lone striker Sammon in the first half as Forest broke forward with more purpose.

The visitors, however, were initially let down by poor passing. Then, after Gonzalo Jara went close, they established a measure of control and took the lead on 31 minutes.

The breakthrough itself was a little fortunate as Sharp was allowed time to cross from the right and Cohen miscued his effort from the edge of the box, but the ball came straight back to him and he made no mistake with the second attempt.

The hosts were gifted an equaliser seven minutes after the break, when Gillett was caught napping in his own half by Sammon. The hulking striker fed the on-running Ward and he finished sweetly to lift the mood at Pride Park.

Jeff Hendrick then fired just over for Derby, before being brought down by Elliott Ward as he bore down on goal again shortly afterwards.

But after Ward's withdrawal, Forest substitute Dexter Blackstock - a reported Derby transfer target - headed wide from a corner and Sharp shot wide of the post as Forest ended the game on top.

Derby manager Nigel Clough, delighted to have striker Jamie Ward back: "That's his first start for three months and he's been our major goal threat when he's started this season so to not have the partnership we wanted out there for three months has been hard for us.

"He was not as sharp as he normally is but he got a great goal. He's one of those players."

Forest manager Alex McLeish on the transfer window: "I am going to try and be as busy as I can. I spoke to the owners today after the game and they are very keen for us to add players to the squad.

"I think these guys have got a good chance of climbing further up the table but I would like to have an even better chance by adding new players.