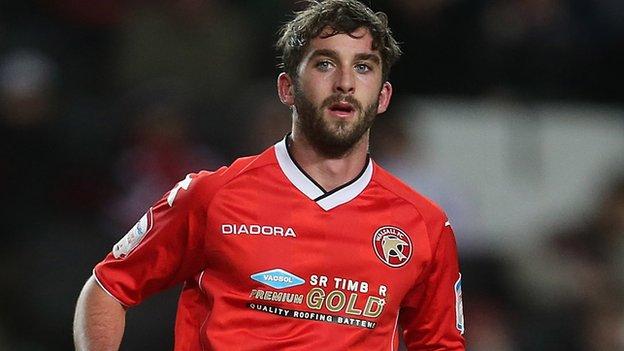 Bournemouth's 15-game unbeaten run in League One came to an end as they were beaten at in-form Walsall.

Sam Mantom put the Saddlers ahead when his cross-shot found the net before Bournemouth's Brett Pitman hit the bar.

Will Grigg doubled Walsall's lead from the spot after he had been brought down by David James while Pitman pulled one back with an excellent low finish.

Febian Brandy saw red for Walsall while Wes Thomas hit the bar for Bournemouth before Grigg scored his second penalty.

Walsall are now up to 10th in League One, having lost only once in their last eight games.

"Defensively that Is as shaky as we've looked for whatever reason. we were never in full control of the situation which we have been near enough in the majority of games since I've come back and with the ball that's as poor as we've been. We regularly turned over possession under minimal pressure; yes the conditions were difficult but still with the talented players that we have you'd expect better."

"We felt at 2-1 we were well in the game and probably the draw's the minimum we're going to get here. I think that third goal's just flattened those hopes."

(On Walsall's controversial second penalty): "It was a bizarre incident really, I mean it was clearest free kick you'll ever see - Steven Cook's almost in desperation because he's been done by the centre forward, who's hacked him down to almost stop him coming into the box, rightly or wrongly.

"Everyone in the ground expected a free kick. Bizarre. It was a free kick, it should never have been a penalty. You can't attach any blame to Eunan (O'Kane), he's picked the ball up almost in good faith really, I think it's probably something you learn from. Very bizarre penalty, I haven't seen one of those ever.

"I think today, when you lose in that type of manner, type of performance when you think 'we haven't performed to the best of our ability' then of course that disappoints you and leaves you then to focus on why and how we can put it right."