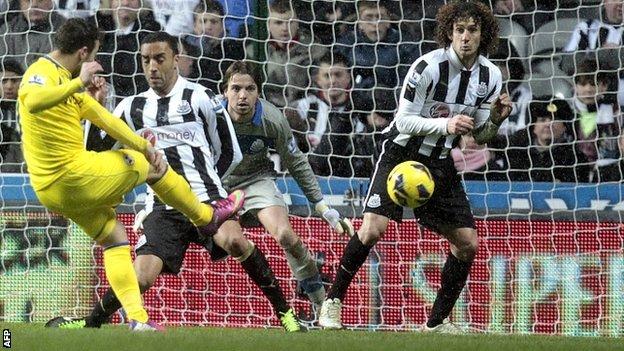 Adam Le Fondre came off the bench to score twice in six minutes as Reading completed a superb turnaround to beat struggling Newcastle.

The hosts were well on top and took a first-half lead when the impressive Yohan Cabaye curled in a free-kick.

And he earned Reading's first away win of the season when he gathered Kebe's nod-down to steer past Tim Krul.

The comeback was reminiscent of Reading's incredible effort against West Brom last Saturday when they came from 2-0 down to win 3-2 with Le Fondre also playing a key part.

Their first victory at Newcastle boosted the Premier League survival chances of Brian McDermott's side, leaving the Magpies without a win in six games.

Just two points now separate the teams and, as much as the three points will encourage the Royals, it will also depress a Newcastle side who were on top for large parts of this match.

Much of that was down to Cabaye, making his first start for Newcastle since 11 November, during which time Alan Pardew's side have won twice in 11 Premier League games.

But Reading capitalised as he tired, and was eventually withdrawn to boos from the home supporters, to win for the third time in four league games.

Cabaye's passing and well timed breaks forward had the Reading midfield turning from the start and it kept the visitors' defence busy too.

After testing Federici from long distance, the France midfielder delightfully picked out Papiss Cisse with a flighted diagonal pass but the Australian keeper clawed away the striker's header. Cisse had two further efforts but again Federici did exceptionally to keep them out.

Reading were willing to let Newcastle dominate possession and break on the counter and they almost took the lead when a sweeping move ended in Pogrebnyak sliding the ball wide from 12 yards from Garath McCleary's cross.

The Magpies have won only three of their 18 league games since former Reading boss Alan Pardew signed his eight-year contract in September. The first game of that run was a 2-2 draw with the Royals

Despite Newcastle's probing, Reading were proving tough to break down but that changed when Cabaye carved them open to take the lead. It was his pass that led to the free-kick, from which he stepped up to nonchalantly curl the ball over the wall and beyond Federici.

Reading have struggled away from home all season but were inches from equalising via a Jonas Gutierrez own goal shortly after the interval when Ian Harte's free-kick clipped the Argentine's knee and fizzed past the far post.

With snow showers continuing at St James' Park, the visitors did not look like scoring until Le Fondre, so often a threat from the bench in Reading's promotion push last season, was introduced.

The substitute was on the field for less than a minute before he bundled home Kebe's low right-wing cross as the ball bounced off his chest.

Le Fondre did not know much about it as he slid in after Mike Williamson missed the ball, but it was his ninth goal of the season and he reached double figures six minutes later.

This time Jobi McAnuff crossed from the left, Kebe nodded it back and although debutant Hope Akpan miscued, it fell to former Rotherham striker Le Fondre, who squeezed the ball past Krul at the near post.

Newcastle struggled to respond and their second half was summed up when Cisse beat the offside trap to fire horribly over from 10 yards.

Reading boss Brian McDermott: "We've looked at our away record and we've been in games, we've learned that you have to try and manage games at this level. We went to 4-4-2 to try and win the game, and I felt at 1-1 we had a major chance of doing it.

"But when you have Adam Le Fondre coming off the bench like that, the second goal was top-drawer finish. A couple of years ago he was playing for Rotherham and what he is doing now for us, I'm just so proud of him."