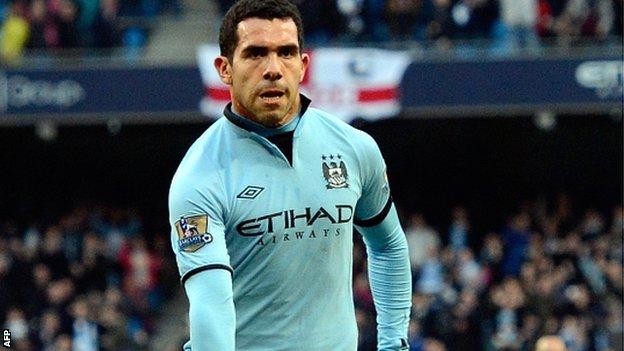 Tevez, 28, joined City in 2009 but was set to leave after Mancini accused him of refusing to come on as a substitute, before he returned home to Argentina.

But he returned to help City win their first title since 1968 and his current deal runs until the summer of 2014.

"I think we have time to talk with him about this," Mancini said. "When Carlos takes a decision, he'll talk with us."

It is a very different scenario from September 2011 when Mancini insisted the striker would never play for the club again following his apparent refusal to leave the bench in a Champions League match at Bayern Munich.

Tevez was absent for five months but since resolving his differences with Mancini the Argentina international has impressed the Italian with his attitude, and is now regarded as an important influence on unpredictable fellow frontman Mario Balotelli.

"His behaviour is very good, he works very well. He is an important player because he has experience in this moment and also now he can help Mario," Mancini said.

Asked if a one-year extension to stop Tevez's value decreasing was a possibility he added: "Yes, this could be because Carlos is 28 and he has other years to play. I think this could be an option."