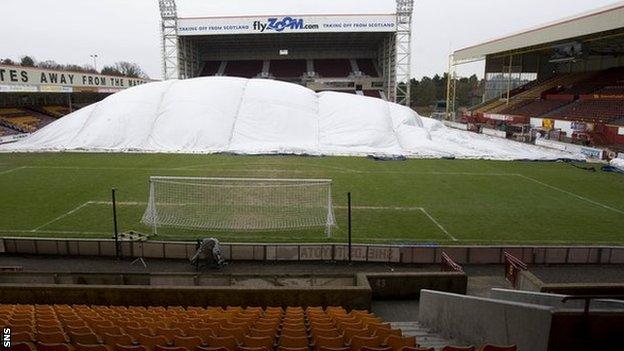 Top-flight rules requiring 6,000 covered seats and under-soil heating are to be scrapped under the proposed new set-up for Scottish football.

And artificial surfaces could appear in the top league, with two clubs contemplating installing them.

Plans seen by BBC Scotland will reduce the licensing criteria for clubs in the two top divisions to bronze level.

There will also be the possibility of short-term derogation for those clubs who currently fall short of meeting bronze level; meaning they could compete in the top leagues while bringing their facilities up to standard.

"The dawning reality from the SPL is that the criteria for stadiums are going to have to be tempered with some realism," he said.

"There has been millions wasted on infrastructure for a bankrupt football set-up just to tick a box on the old SPL check-list."

It has also emerged that the club winning the title will give up £315,000 from their prize money which presently stands at £2.7m, with the runners-up also surrendering a substantial sum from the £2.4m currently on offer.

The biggest clubs have agreed to the cuts to fund the proposed changes and ensure a fairer distribution of cash throughout the divisions.

The winners of this season's First Division will pick up £68,000.

If the proposed changes are voted through, the team finishing effectively in the same position stand to earn £387,000.

To offset the financial hardship of relegation, given the possibility of up to four clubs being relegated each season, an advance of £200,000 will be made to each club dropping out of the top league at the beginning of the first season following their relegation.

After two rounds of fixtures which are due to culminate with New Year derbies, the top two leagues would split into three sections of eight for two further rounds of matches.

The top eight will contest the title and European places, the middle eight would play-off to decide which sides would start the following season in the first or second tier and matches in the bottom eight would determine which sides were to be relegated to the bottom tier of 18.

The winners of the "play-off" eight and the "Championship" eight will receive a trophy or a pennant.

The clubs finishing first and second in the National league of 18 will be promoted, with the four teams below involved in play-offs with those finishing fifth and sixth in the Championship eight.

From season 2014/15, the bottom two from the National league will be relegated and replaced by sides from an unspecified set-up that will involve the Highland League, Juniors and the East of Scotland League.

The document outlining the changes says: "These proposals... will ensure a dramatic, exciting league with meaningful matches at all levels and at all points of the season."

The proposed voting structure in the new set-up would see Premier clubs having three votes, with those in the Championship receiving two votes and National league clubs getting one vote.

An independent executive chairman would have the casting vote in the event of a stalemate.

July League Cup games are also under consideration, with the league programme to start at the beginning of August.

The SFL will put the plans to its clubs later this month, with 22 of the 29 full members needing to give their formal approval. Rangers, as associate members, do not have voting rights.