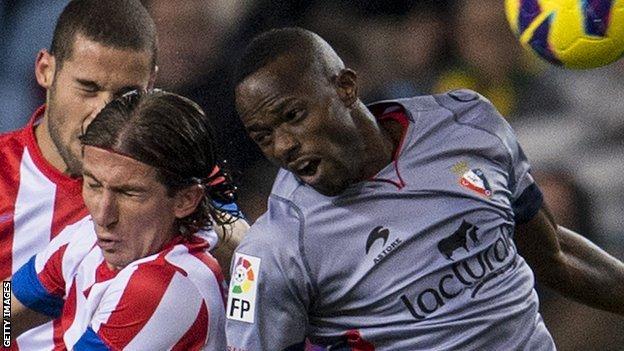 Winger Roland Lamah has signed on loan for Swansea City from Spanish side Osasuna.

The 25-year-old Belgium international has signed for the next 18 months and the Swans are expected to sign him on permanent deal at then of the loan.

Lamah, born in the Ivory Coast, is contracted at Osasuna until June 2014.

"This is a great opportunity for me and I'm happy to be here," said Lamah, who has represented Belgium from Under-19 to senior level, winning five caps.

"I know a few of the players here, and I already know that Swansea is a family club that will suit my style of play."

We're looking for an additional wide player to come in

As a youngster, Lamah moved from his country of birth to join Belgian club Vise. At the age of 17, he moved on to Anderlecht before a 2007-08 loan spell at Roda JC in the Dutch top flight.

Lamah, who last played for Belgium in 2009, then joined French second-tier side Le Mans in 2008, moving to Osasuna three years later.

He will not be eligible to play in the third round FA Cup replay at Arsenal on Wednesday, but could feature for Michael Laudrup's side in Saturday's Premier League meeting with Stoke City.

Swansea chairman Huw Jenkins said: "It's a bit unusual (an 18 month loan), but that's what the club (Osasuna) wanted and we were happy to go along with that.

"Let's hope he settles in quickly and proves a good addition to the squad. If everything goes well we have an option to buy the player."

Jenkins denied reports they have had a bid rejected by Stoke for striker Kenwyne Jones, but said more players could be arriving in January.

"We're looking for an additional wide player to come in with additional assets to the wide players we've already got, just an additional member of the squad given the run of games, the amount of games we've got to play in January," he said.

"You know from January onwards it'll just be good to have one or two players in fresh and new with us really."