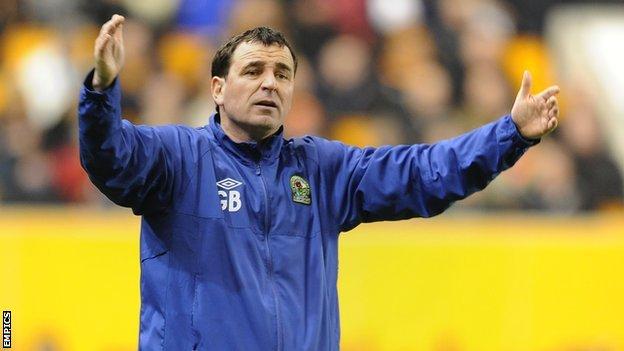 Rovers won three and drew one of their four matches under reserve coach Bowyer and youth boss Terry McPhillips.

Bowyer told BBC North West Sport: "It wasn't ever about me. It's always been about the players since I took over.

"They've been truly magnificent for us. I can't thank them enough."

Appleton will leave Blackpool to take the reins at Rovers and become the club's third permanent manager of the season.

but the 37-year-old was not present at Molineux to watch his new side extend their unbeaten run to four games.

Jordan Rhodes put the visitors ahead from the penalty spot and Rovers would have registered a fourth straight win for the first time since October 2007, had it not been for Roger Johnson's second-half equaliser.

Blackburn had won just one of their 10 matches under previous boss Henning Berg, who was sacked on 27 December after only 57 days at Ewood Park.

But performances and results have been transformed under Bowyer, who will now revert to his previous role.

"We knew what we were entering when we were asked to look after things," he continued. "We've got a role at the club and we know what that role is.

"We've been developing players like Phil Jones (who was sold to Manchester United for a reported £17m in 2011) and Grant Hanley and Jason Lowe, who were both magnificent at Wolves. That's the role that we will go back to.

"We're delighted that we've got a manager coming in who can provide us with some stability.

"He's worked under several good managers and he's a good coach. I know that from when he was in charge of the youth team at West Bromwich Albion. We're looking forward to working with him."