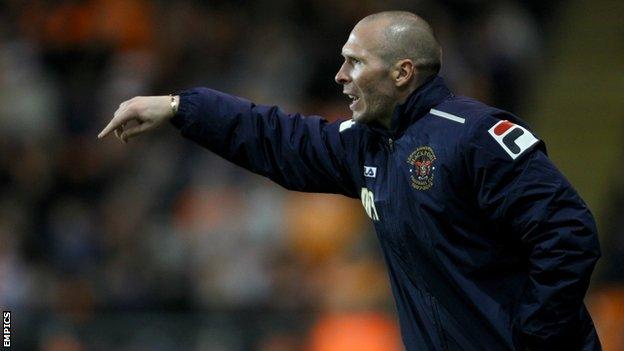 Blackpool chairman Karl Oyston has said any "conspiracy theories" about a fall-out between himself and Michael Appleton are untrue and not the reason for Appleton's departure to Blackburn.

"There's no fall-out. That's one of the more easily dismissible rumours going."

27 December: Berg sacked by Blackburn after just 57 days in charge

He added: "We should dismiss it because it's factually incorrect."

News of Blackburn's move for Appleton was made official late on Wednesday night, and having initially rejected the approach, Blackpool eventually granted Rovers permission to speak to the former Portsmouth boss about their managerial vacancy.

"He's contractually entitled to leave if he gets a better offer.

"Michael's spoken to Blackburn and it's a particularly good offer for him. In his shoes, most people would have done the same thing.

"The level of the offer was very high and I believe it's longer term.

"Disappointment has got to be tempered with some realism - in particular, the fact that there's so much money at stake.

"Whatever people have signed and whatever the morals involved in walking out of contracts are, you'd have to be a very robust character not to chase that sort of offer.

"It's not a shock at all. These things happen in football pretty regularly.

"Fans follow football throughout the world and anyone who's shocked by this is very naive, frankly.

"It's not unheard of in football that people get better offers and move on. It's part of the very nature of the sport that we all follow."

Oyston and Blackpool are now faced with searching for another new boss, just two months after Appleton was brought in to replace Ian Holloway, who left to join Crystal Palace at the start of November 2012.

Steve Thompson, who served as assistant to both Holloway and Appleton at Blackpool, will take caretaker charge of the team at Charlton on Saturday.