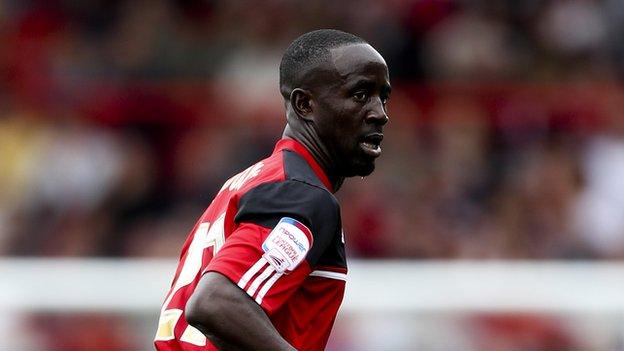 Bristol City winger Albert Adomah will complete an incredible journey from park football to the Africa Cup of Nations when Ghana face the Democratic Republic of Congo on 20 January in Port Elizabeth.

After being left out of Ghana's final squad last year, the 25-year-old who began his football career playing for amateur club Old Meadonians in west London was selected by coach Kwesi Appiah last week for the tournament in South Africa.

"I even used to be Ghana on computer games but now I can pick myself in the team. It's unbelievable

"I spoke to my Dad on the same day that the final 23 was announced and he said that he had been worried at work all day," Adomah told BBC Sport.

"When I told him the good news he told me all the stress came out of his body because he was so excited for me. I made his day and my whole family were very excited for me. All my friends that I used to play football with in the park are all really proud of me too so I can't wait now."

Born in London, Adomah lived with his grandparents in Ghana until the age of nine. He played in the Amateur Football Combination for Old Meadonians before moving to non-league Harrow Borough aged 18.

Adomah studied for an apprenticeship in painting and decorating at the same time but was eventually snapped up by Barnet in 2008, where he was sponsored by BBC commentator John Motson.

His move to Bristol City 18 months later caught the eye of Black Stars officials, leading to his debut against Brazil in September 2011.

But having now been handed the legendary number 10 shirt, in the absence of Marseille star Andre Ayew, Adomah is still having to pinch himself.

"Not long ago I was working and just playing in the park. I used to watch people like Asamoah Gyan on Match of the Day and now I'm actually playing in the same team as him," he said.

"I even used to be Ghana on Fifa and other computer games but now I can pick myself in the team. It's unbelievable."

Adomah added: "In Ghana, the number 10 shirt is very important because of Abedi Pele so straight away they assume that I'm there to fill his son's boots.

"But it's only a number so I'm just trying to play my game and do my best. It shows faith that the coach gave me the number but I don't feel any extra pressure because of it."

The Black Stars were eliminated in the semi-finals by eventual winners Zambia last year, taking their wait for African glory to beyond the 30-year mark.

Despite being one of 10 members of the Ghana squad who will be featuring in their first major tournament, Adomah believes they are contenders to win the tournament for the first time since 1982.

"I think we're second favourites but anyone can beat anyone on a given day," he said.

"We're not going to put pressure on ourselves and say we have to win every game. But hopefully we can get through the group and try to go beyond that and bring home the trophy.

"We've still got most of the players from the World Cup but there's a lot of players appearing in their first big tournament too. It's up to the new players to play their hearts out and not just rely on the old players."