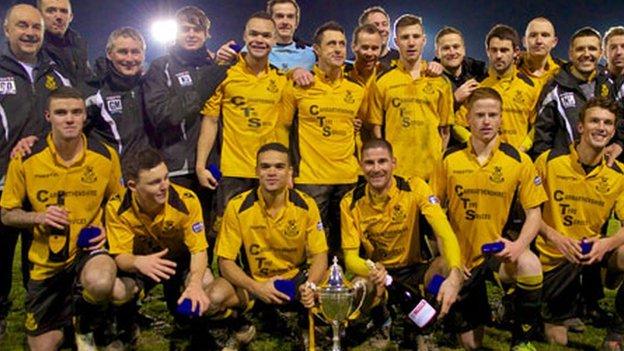 Carmarthen goalkeeper Steven Cann saved from his opposite number Paul Harrison to secure a 3-1 win in the shoot-out.

The Saints forced extra time with Michael Wilde's late equaliser, and neither side managed a breakthrough during the added 30 minutes.

Corey Thomas, Liam Thomas and Craig Hanford then converted from the spot for Carmarthen to give them victory.

Alex Darlington scored the only penalty for the Saints, who had taken a sixth-minute lead through former Wales international Steve Evans.

The Saints restored their lead through Sam Finey after Craig Hughes had levelled just before the break.

But the final swung in Carmarthen's favour when Corey Thomas scored twice in seven minutes, only for Wilde's 83rd-minute strike to force extra time and then penalties.

Both first attempts were saved, but Carmarthen converted their next three and Cann's save from Harrison gave them victory.