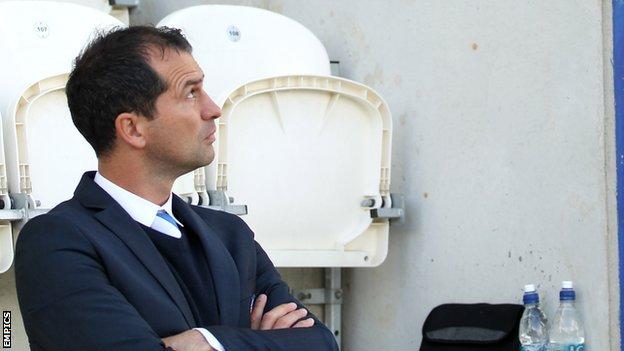 left them in the drop-zone, two points adrift of safety.

"I need to speak to the chairman. He's been very supportive of me. I know what I want to try and do with the club but I love this club too much to see it suffer the way it is at the moment."

How has Dunne done?

Irishman Dunne, 39, and made a promising start to his first permanent managerial role, winning four of his first seven games.

However, that run has been followed by a sequence of one win in 14 outings in all competitions.

Funds have been low at the Weston Homes Community Stadium, with which was opened in the summer, and the development of young talent.

But Dunne, a former defender who played 167 times across two spells for the U's, will now discuss his future with chairman Robbie Cowling.

"There are many solutions to problems and I'm man enough and big enough to know we're not in a good position at the moment," he said.

"I still believe in what I know I can bring to the club. I want to bring a passing game and a lot of excitement.

"But solutions may be another voice. I just need to speak to my family and the chairman and see over the weekend."