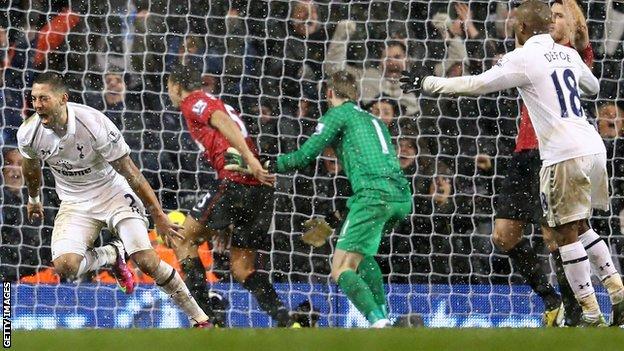 The Spurs forward scrambled the ball over the line in time added on, to leave Sir Alex Ferguson's side only five points ahead of Manchester City at the top of the Premier League table.

Robin van Persie had headed in his 22nd goal of the season midway through the first half to put United in control.

Spurs manager Andre Villas-Boas's clenched fist said it all at the final whistle. It was a reaction every bit as defiant as the performance of his players.

United have built a reputation for scoring late, but on this occasion it was Ferguson who was left to swallow the most bitter of pills.

For 92 minutes, United had looked on course to restore their seven-point lead at the top of the table. With Phil Jones, Michael Carrick and Tom Cleverley driving them forward, they been controlled and efficient, rather than electrifying.

Snow fell throughout, the pitch having been passed fit for play an hour before kick-off, but just when United thought they had weathered the conditions and Tottenham's second-half storm, Dempsey struck.

For most of the game, Van Persie's brilliance had once again looked as if it would gloss over any United weaknesses, with the solidity of Rio Ferdinand and Nemanja Vidic at the heart of the defence equally impressive.

United goalkeeper David De Gea also shone, keeping his side in the game time and again during a second-half bombardment, only to fail to punch clear in the lead-up to Tottenham's equaliser.

And yet, despite that goal, United have more points after 23 games than all but one team in Premier League history. They remain firmly in control.

White Hart Lane had been curiously subdued for much of the opening 25 minutes when Van Persie sparked the contest in life.

The goal came after a patient build-up that gathered pace when Danny Welbeck found Cleverley in an advanced position on the right-hand side. His cross, whipped into the penalty area, was a good one, but Van Persie made it look even better, pulling away from Kyle Walker to head the ball forcefully beyond Lloris at his near post for his 10th goal in as many league games.

Tottenham were looking for their first double over United since the 1989-90 season but, with Gareth Bale struggling to impose his authority on a midfield in which United scrapped for everything, the first half flickered, rather than blazed.

Much of that was down to United's insatiable work-rate, with their players often doubling up on Tottenham's main threat - in Rafael and Phil Jones, Bale found he had unwelcome, unstinting company.

With half-time approaching, a loose ball broke for Bale on the edge of the penalty area and he was on to it in a flash, letting fly with his right foot. The ball flicked off Ferdinand but, despite being wrong-footed by the deflection, De Gea made the save with an outstretched left leg.

The Spaniard was required to make another early in the second half to deny Dempsey from six yards with the goal apparently at his mercy and saved United again by tipping another goal-bound effort from the American just round his right-hand post.

With Spurs growing as an attacking threat, Ferguson responded by introducing Rooney, who almost made an immediate impression. The England striker went down in the penalty area, having been clipped by Steven Caulker only to see referee Chris Foy wave away United's claims.

Still Spurs continued to pour forward - Lennon zipped away from Patrice Evra and freed Defoe in the penalty area but at the crucial moment the England striker hesitated, allowing Ferdinand to appear from nowhere to snuff out the danger.

Tottenham manager Andre Villas-Boas: "We dominated the whole game, played well and deserved to win. We had 60% possession against United, 15 shots against four and should have won. Champions like United have to go through moments like this but I think we deserved this last-minute goal.

"We set our targets high, we wanted to win. We understood you are not going to go two or three up but we managed to get at least a point and a deserved point."

"When you play against a team with Gareth Bale in it you have to set yourself up right. We didn't do that at Old Trafford - we were not going to make the same mistake again. They are a team who are improving under a new manager, so we leave here not too down."