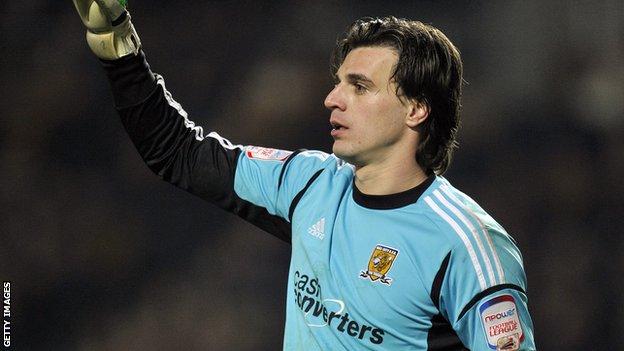 Hull goalkeeper Eldin Jakupovic has been given the all clear after suffering a facial injury in Saturday's 3-1 defeat by Sheffield Wednesday.

The 28-year-old was taken off on a stretcher wearing a neck brace and taken to hospital for tests.

"At no time did he suffer a loss of consciousness, he was completely responsive throughout."

The Swiss international collided with Owls defender Reda Johnson, just moments after he conceded an own goal to give Wednesday a 2-1 lead.

He received lengthy treatment on the pitch before he was carried off.

The defeat was confirmed in injury time when Michail Antonio beat stand-in keeper Mark Oxley and Jay Simpson missed a penalty for the home side.

Despite the defeat, Bruce's side remain second in the Championship table but eight points behind leaders Cardiff.