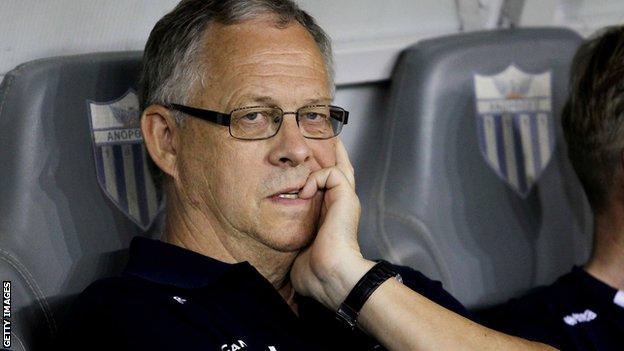 Lars Lagerback would be interested in discussing the Scotland manager's role but insists he has not been approached regarding the vacant post.

The 64-year-old Swede is currently in charge of Iceland.

Lagerback has featured prominently in the betting for Scotland boss and told BBC Sport: "It would be a nice job.

"But I'm not sure the Iceland FA would want to release me from this job, and I'm fully focused on what I'm doing there."

Lagerback, who led Nigeria at the 2010 World Cup before taking up the position with Iceland, was in charge of the Swedish national team for close to a decade.

Lagerback is contracted to Iceland until at least the end of the World Cup qualifiers.

Iceland sit fourth in Group E, with two wins and two defeats leaving them just one point behind second-placed Norway.

Scotland are bottom of Group A, with a mere two points from their four matches.

Craig Levein was removed from the post in November, with Under-21 boss Billy Stark put in temporary charge.

"It would be an honour to be asked to manage your own national side," said former Celtic manager Strachan, while ex-Bolton boss Coyle said: "I'm always open to hearing what someone has to say. It's a great job, that's for sure."