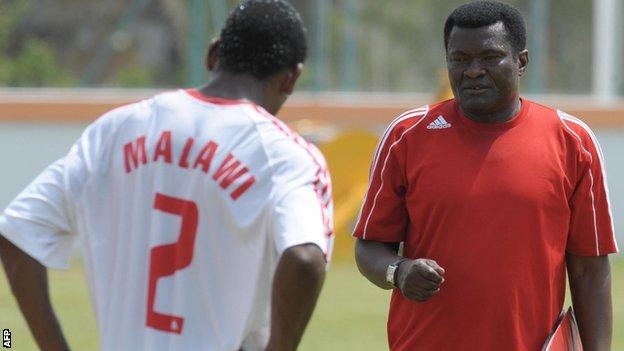 Malawi have sacked Kinnah Phiri and his entire coaching staff due to their failure to qualify for the Africa Cup of Nations, followed by a disappointing display at the Cecafa Senior Challenge.

Phiri took charge of the Flames in 2008 and only signed a contract extension until 2014 in October last year.

But Malawi's failure to qualify for this year's Africa Cup of Nations had alarm bells ringing, with commentators claiming the coach had run out of ideas.

The Malawi Football Association (FAM) initially announced that it was going to reshuffle the technical panel, whilst government warned the coach risked expulsion when parliamentarians raised concern over the team's poor showing in 2012.

Malawi sank to their lowest position in 2012 when they dropped to 111 in the Fifa rankings. This followed the Flames poor showing at the Cecafa Senior Challenge where - for the third year running - they went out at the quarter final stage.

Phiri earned praise when he qualified Malawi for the 2010 Africa Cup of Nations for the first time in 25 years, since when it has been hard for the coach to move forward.

A FAM statement read: "Football Association of Malawi would like to announce that at its Emergency Executive Meeting held on 12th January 2013, a decision was taken to relieve the National Coach and the entire technical panel of its duties with immediate effect owing to a poor run of results of the Malawi National Team.

"This decision also applies to the position of the Technical Director. Having dissolved the technical panel, it has been agreed that Malawi Government should terminate the employment contract of the concerned parties."

The coach was not readily available for comment but confirmed he had been sacked.

FAM has not named a successor but said in a statement that they will soon name a new man who will prepare the team for the World Cup qualifier against Namibia in March.