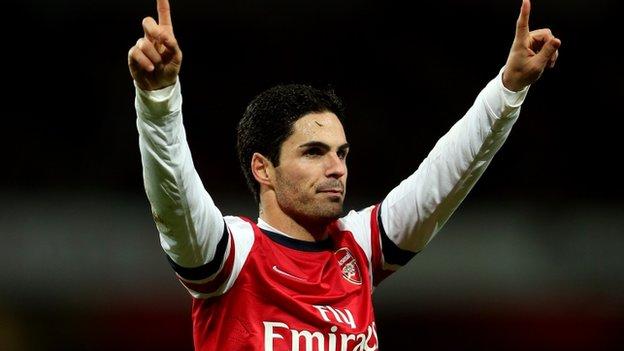 Arsenal midfielder Mikel Arteta has been ruled out of action for three weeks with a calf strain.

The Spaniard, 30, who joined Arsenal in August 2011, suffered the injury in training this week and missed the Gunners' 2-0 defeat by Manchester City.

Manager Arsene Wenger said: "He has a scan on Monday. He will be out for about three weeks. It's a calf strain.

"It is a blow because in midfield he gives us experience, stability and tactical knowledge. We will miss that."

Wenger acknowledged Arteta's injury would add to the pressure to bring in new players before the transfer window closes at the end of January.

"We are in the market, but to find players of the calibre of Arteta in January, I wish you good luck.

Mikel Arteta, who joined Arsenal on transfer deadline day in August 2011, has scored four goals in 26 appearances so far this season.

"We try very hard, believe me. I don't want to talk specifically about names."

French midfielder Abou Diaby returned from a three-month injury lay-off to replace Arteta, who has scored four goals in 26 appearances this season, in the Arsenal midfield.

He lasted an hour before being replaced by Aaron Ramsey.

Wenger added that his side paid for a timid approach against City as they fell 21 points behind league leaders Manchester United.

"Overall we started too timidly, with not enough authority in a game like that, and allowed them to dictate," he said. "We paid very early for that.

"You have to dictate your personality, especially defensively.

"It is frustrating because the team showed great heart and desire after that, but we were a bit too nervous to play in a serene way at home and that is costing us."

The Gunners were on the back foot after 10 minutes when defender Laurent Koscielny was sent off for bringing down Edin Dzeko in the box.

The Arsenal boss said: "What do I make of the decision? That is not really important. You have to live with the decision.

"I was surprised, but honestly. I will watch it again. I have heard it was a penalty. Was it a red card? I don't know."