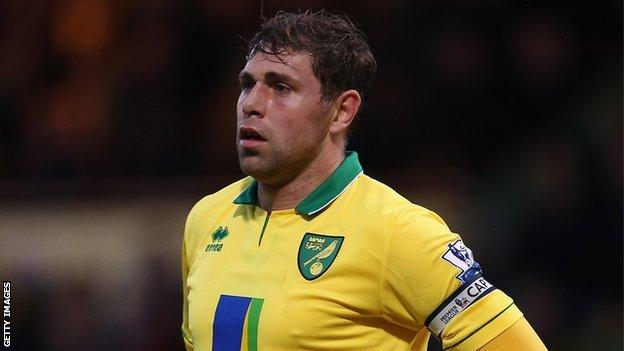 Norwich City boss Chris Hughton has said he cannot afford to rush striker Grant Holt back from injury and risk losing him long-term.

"We've had to tread carefully with Grant over the past couple of weeks," Hughton told BBC Radio Norfolk.

All six of Norwich's Premier League wins this season have come with Grant Holt in the starting line-up.

They have lost five of the six games he has not started.

Holt, Norwich's top scorer and player of the year for the last three seasons, has not started any of his side's last four games, including Premier League defeats by Manchester City and West Ham.

But he could be in contention to lead the line at Liverpool this weekend after playing 22 minutes against the Magpies.

"There was a fear that if we started him then we would be putting him a little bit at risk," added Hughton.

"So we have to make these tough decisions. Most would have liked to have seen us start with Grant.

"We hope now he has a good week's training and will be available from next week onwards."

A thigh injury to Steve Morison means Hughton has been short of forward options during the new year period.

Reports had suggested the Carrow Road club had made an offer for Celtic's top scorer Gary Hooper, but Hughton has said he has yet to table any bids so far in the January transfer window.

"A lot has been spoken about the forward areas because we haven't perhaps scored the goals that we would have liked to," he said.

"But we're looking to strengthen full stop. Players are generally not available and you've got to pay over the odds for them.

"I'm sure like most clubs the last couple of weeks of the window could be hectic ones. We've made no offers at this moment."