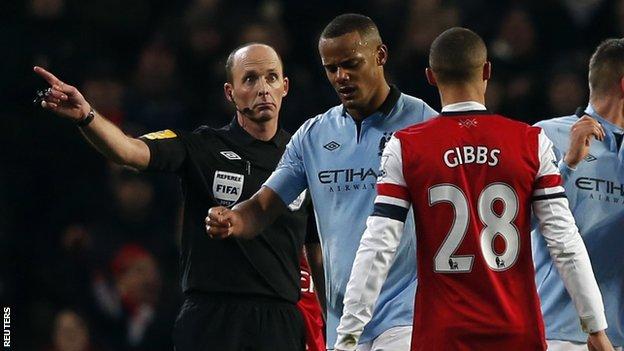 Manchester City have appealed against the red card which saw captain Vincent Kompany sent off in the second half the 2-0 victory over Arsenal.

Kompany, 26, was dismissed by referee Mike Dean for a dangerous tackle on Gunners midfielder Jack Wilshere.

The City centre-back defended his challenge in the aftermath of the game.

Belgium international Kompany tweeted: "If the ball is overrun by the opponent and a 50/50 challenge occurs, [a] collision is inevitable."

City have until 13:00 on Tuesday to submit evidence to back up their appeal, which will be heard by an independent commission with an outcome expected later in the day.

For the Premier League champions to succeed, they must convince the commission an obvious error was made by Dean.

The normal punishment for a straight red card is a three-game ban but extra matches can be added if City are found to have made an appeal despite having no "prospect of success".

The commission can add up to three games to the ban as a penalty, although normally the sanction is only one extra game.

City decided to press ahead with their protest after boss Roberto Mancini said Kompany had been the victim of a "big mistake" by Dean.

"It was no sending off," he told BBC Sport. "He went into the tackle with one foot in front and the other behind.

"I think that the referee did make a big mistake."

Kompany followed Arsenal's Laurent Koscielny - who was dismissed after only 10 minutes for hauling down Edin Dzeko in the penalty area - in being sent off.

Despite winning the ball in the 75th minute, the Belgium international was adjudged to have committed a reckless tackle.

Although he disputed the call, Kompany refused to blame Dean.

"No grudges against the referee, I understand the difficulty of the job," he further tweeted.

"Ultimately I'm a defender: Appeal may work or not. I will never pull out of a challenge, as much as I will never intend to injure a player."

Unless the appeal is successful, Kompany will serve a three-game suspension against Fulham and QPR in the Premier League, either side of an FA Cup fourth round fixture against Crystal Palace or Stoke.

Mancini has set a target of closing that gap to five before the teams meet in April.

He said: "United are a really strong team. In this moment, they play very well.

"But the season is long. It's important for us to be there, close with them, and we will arrive the moment they lose points.

"We're under pressure maybe before, but seven, eight or nine points, everything can change at the moment. We have the derby on 6 April and we need to arrive there with five or four points behind, it is okay."