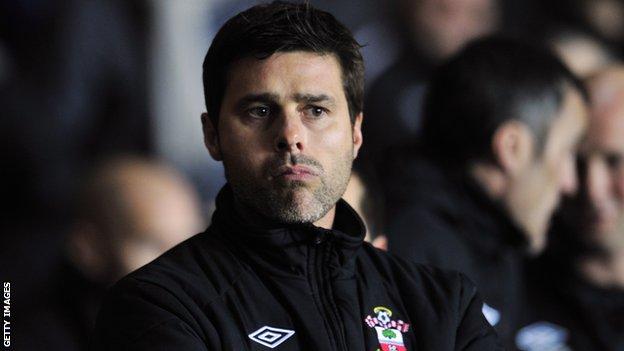 Mauricio Pochettino's Southampton managerial career got off to a promising start as an entertaining game with Everton ended goalless.

Pochettino was greeted by warm applause when he took his place in the dugout, and fans will have been happy with his side's first-half display.

Rickie Lambert hit the post before he saw a header cleared off the line.

The visitors improved after the break as Nikica Jelavic mis-hit a shot before Victor Anichebe's drive was saved.

The home side finished strongly and though they could not find a winner, it was ultimately a well-earned point after recent events at the club.

This was Southampton's first goalless draw at St Mary's in over two years.

Much of the focus in the build-up to the game was understandably on Pochettino, who was named Southampton manager on Friday following the surprise sacking of Nigel Adkins.

A throng of photographers had their cameras pointed at the Southampton technical area prior to kick-off as they awaited his arrival, and when the former Espanyol coach did emerge from the tunnel there was a ripple of applause from the home fans within the vicinity of the dugout.

Adkins's contribution to the club was recognised by fans though, as a chant of 'only one Nigel Adkins' rang out as the game got under way, but aside from that there was little in the way of protests.

Despite the potentially unsettling events of the last few days, Southampton started brightly as Phil Jagielka almost diverted Lambert's low cross into his own net, before Jason Puncheon's drive from a dangerous position deflected off Jagielka.

It took Everton 15 minutes to get themselves going but even when they did, they did not trouble Artur Boruc in the Southampton goal as Jelavic headed tamely wide from Marouane Fellaini's ball, before Leighton Baines saw a shot blocked.

Instead it was Saints who continued to look the most likely to score and only the woodwork denied them the lead in the 20th minute as Lambert's curled free-kick bounced back off the left upright.

Minutes later the lively Lambert had another chance as he raced into the area, cut the ball back onto his left foot before trying to bend a shot beyond Tim Howard, but the Everton keeper parried the effort away.

Lambert went even closer midway through the half as his header from a corner was cleared off the line by Jelavic before Jos Hooiveld volleyed straight at Howard from the ensuing mix-up in the area.

As impressive as Southampton had been there was always the fear that they would be made to rue missed chances and that was almost the case six minutes into the second half with Fellaini twice going close.

The Belgian midfielder first saw a close-range shot denied by the feet of Boruc and then directed a header straight at the Southampton keeper.

Anichebe was introduced soon after and the striker's pace soon started to cause the home side defensive problems.

Everton should have been ahead on the hour when Anichebe's well-timed run punched through the Southampton backline and he squared a pass for the unmarked Jelavic inside the area, but the Croatian completely missed his kick and a grateful defence cleared.

Boruc did well to push away a powerful drive from Anichebe as Everton continued to press but Southampton survived, soaking up the pressure before finishing strongly.

Lambert planted a header on the roof of Howard's net but in the end a draw was a probably a fair result.

Everton manager David Moyes said: "We got better after we had a word at half-time. The chance for Jelavic was a real big chance, we are a little bit like that at the moment.

"This time last year we were stealing the goals but it will come. Kevin Mirallas and Victor Anichebe made an impact for us and a draw here is not a bad result.

"We are in a good position and we have as much chance of anyone of getting that fourth spot."