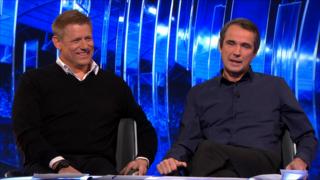 Mark Chapman is joined by Alan Hansen and Peter Schmeichel to reflect on the weekend's fixtures and Fifa's controversial team of the year.

The team, which was voted for by footballers across the world, is made up entirely of La Liga players, and the pundits are shocked no Premier League players featured.

Hansen believes Manchester City captain Vincent Kompany should have made the grade, while Schmeichel says Real Madrid keeper Iker Casillas does not deserve his place on the team.