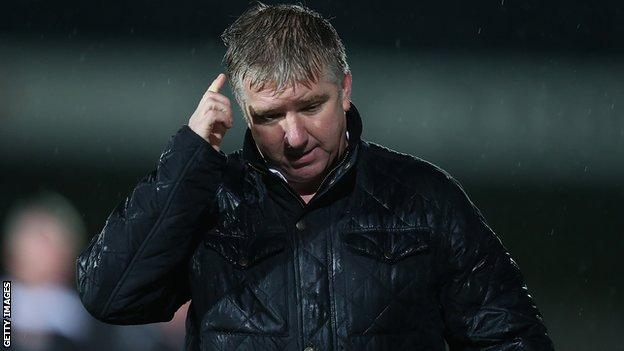 Torquay United manager Martin Ling says his side seem to have a 'death wish' when it comes to losing matches.

The Gulls led 1-0 before losing on Saturday, their fifth game without a victory in League Two.

"We seem to have a death wish where we seem to find a defeat from any given position," he told BBC Radio Devon.

"It's no use talking about the play-offs, we've got to start looking over our shoulder a little bit if we don't start getting wins soon."

He continued: "We'll end up in a relegation fight if we're not careful. We're a lot better than that, but you have to prove that by winning games of football."

Despite the defeat, the Gulls stayed in 16th place in the table and Ling did feel there were some positives to take from his side's performance at the Pirelli Stadium.

"The better side got beat on the day," he said.

"As an attacking unit that's as well as we've played for a while. We looked like we could open them up, but we still threw it away at the other end.

"Whereas last year we seemed to find a way of winning games, at this moment in time we seem to find a way to lose games, and that's not a nice situation to be in."