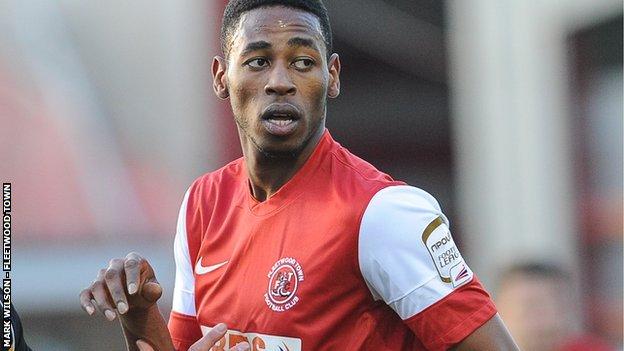 Kidderminster Harriers chairman Mark Serrell has insisted they will not be held to ransom by other teams thinking they can cash in on last week's club record sale of striker Jamille Matt.

Matt's £300,000 departure to Fleetwood has generated cash for Harriers manager Steve Burr to strengthen his squad.

"We'll try and get players in if it is at all possible," said Serrell.

"But my concern is that people who now know we have received substantial funds may value their players at a lot more."

Serrell joked that, in 52-year-old, Aberdeen-born Burr, they have a manager who treats the club's money is as if it was his own.

I don't know if it's with him being a Scotsman, but our manager Steve Burr doesn't like paying any transfer fees

"I don't know if it's with him being a Scotsman," Serrell told BBC Hereford & Worcester, "but Steve doesn't like paying any transfer fees.

"He seems to look for the best value and he knows exactly where we are.

"Clubs may now be looking for more than they would have done a week ago, but that is something we have to deal with.

"We've got a fair record in trying to look after the best interests of the football club financially and we will continue to do that."

Harriers and the departed Matt, who had hit eight goals in his last seven league games for Burr's side, had contrasting fortunes on Saturday.

While Matt's Fleetwood debut ended in a 3-0 home defeat by the Football League's bottom club, Bristol Rovers, Burr's men cemented their place in the Blue Square Bet Premier top five with a 2-0 win at Mansfield.

Harriers, bottom of the league in September, have now lost just twice in 22 league games to edge to within six points of leaders Wrexham.