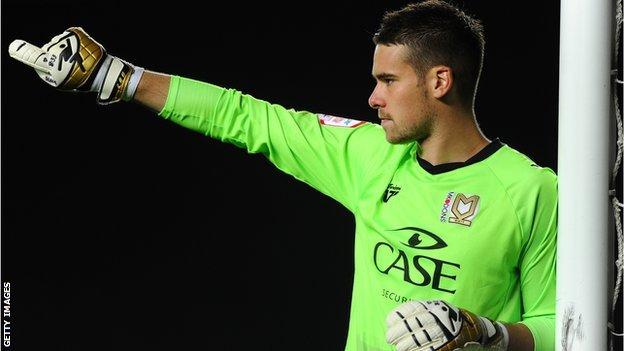 New Walsall keeper Ian McLoughlin could stay for longer than his agreed one-month loan if he continues to prove a success at the Banks's Stadium.

Following his arrival from MK Dons, the 21-year-old Irishman made a good start for the Saddlers with two key saves in Sunday's 3-1 win at Preston.

"Initially it's for a month, but we'll see where we go from there.

"It was a pleasing debut for him. I hope he can continue that," Walsall boss Dean Smith told BBC WM.

"His kicking was really good, he handled the ball well and his relationship with his back four was good. He made two good saves and deserved a clean sheet."

The arrival of Dublin-born McLoughlin was triggered by Friday's recall from Walsall of Karl Darlow, who made his league debut for parent club Nottingham Forest in their 2-1 home win over Peterborough at the City Ground.

After starting the season with Hungarian David Grof, they brought in Darlow for the first of two loan spells.

He was then followed by Aaron McCarey from Wolves, who made eight appearances following his arrival in November.

Veteran Jimmy Walker and trainee Richard Jones have also both been on the bench.