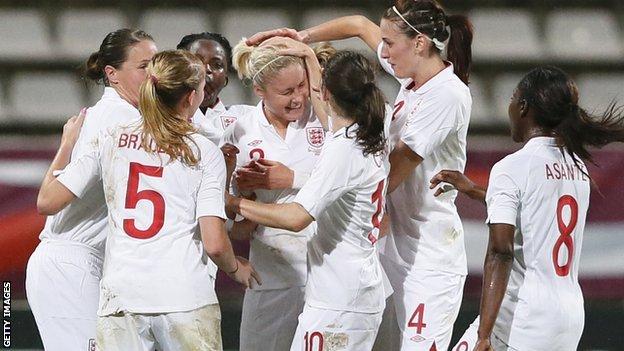 The England women's football team are set to receive a £4,000 pay increase following successful negotiations with the Football Association.

The new package, set to be confirmed in the next few days, also increases the number of hours players can work in secondary jobs to 24 a week.

A liaison committee and a bonus scheme have been introduced.

The 20 players under central contracts have been represented by the Professional Footballers' Association and were not paid in December while talks took place - though the FA said it always expected a satisfactory resolution.

The union covered the December shortfall and contributed money to the new contracts, which England players earn on top of semi-professional deals with their clubs.

At club level, Women's Super League rules mean teams are only allowed to pay four players £20,000 or more a year.

PFA chief Gordon Taylor called the previous package "embarrassing" and England defender Sophie Bradley told BBC Sport that if players earned more money, they would be able to focus on training without the distractions or stress of work.

She also argued that players should be rewarded for the part they had played in English football's recent success.

If players wish to continue working, the new deal increases the part-time hours they are permitted from 18 to 24 per week.