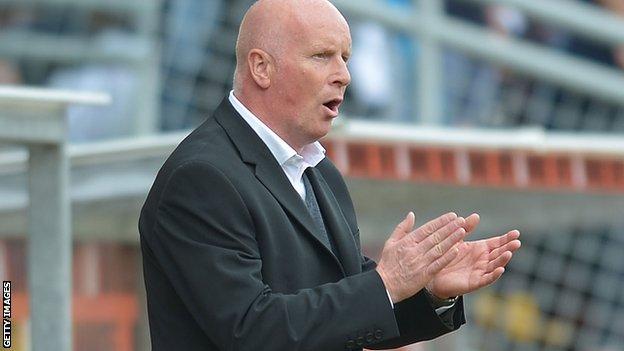 Blackpool have confirmed they have not spoken to Dundee United's Peter Houston regarding their managerial vacancy.

The Scottish Premier League club said on Monday that they had given the Seasiders permission to talk to Houston about replacing Michael Appleton, who

MK Dons manager Karl Robinson is the latest name to be linked with the job.

Speaking after the League One club beat Sheffield Wednesday in the FA Cup on Tuesday evening, the 32-year-old said he would

News of Blackpool's "official approach" for Houston, 54, came as a surprise to the Championship club.

Williams continued: "Karl Oyston [Blackpool chairman] rang their chairman on Sunday afternoon, and their chairman said 'if you want to speak to him, you can'.

"Then it's that he's the bookies' favourite and people are thinking he's coming to Blackpool.

"The Dundee United chairman [Steven Thompson] is someone Karl has spoken to on a number of occasions about various players and they had a conversation about the manager, who was put to us by an agent, I hasten to add.

"There are a number of other candidates that we have spoken to - some weren't interested because of the location, some wanted a conversation but we've discarded them. It's an ongoing process."

One of those candidates was Sean O'Driscoll, who was offered the position following a meeting with Blackpool on Friday, but turned down the job at Bloomfield Road

"We had the discussion, he was happy with things and he wanted 24 hours to think about things," said Williams. "The Bristol City thing came about, they approached him and he felt that was better for him."

Oyston and Blackpool are searching for their third permanent manager of the season following the departures of Appleton and, prior to that, Ian Holloway to Crystal Palace in November.

"The decision he's made with the majority of managers he's appointed has been good and has taken the club forward each time. Even Michael - he solved some of the defensive frailties that were here following Ian's tenure at the club."