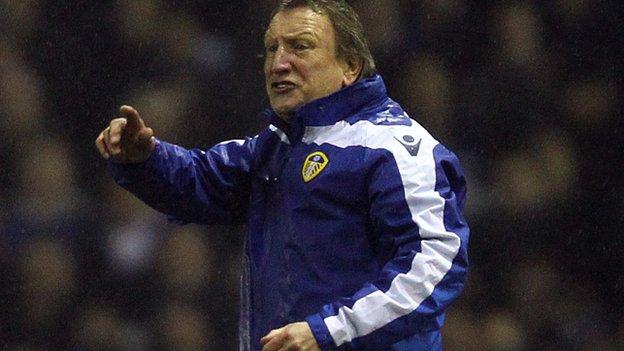 Leeds United boss Neil Warnock says he is not worried about his position at the club despite their patchy recent form.

Warnock's side were beaten 2-0 by Yorkshire rivals Barnsley on Saturday and have won just one of their last five games.

"I'm not looking over my shoulder at all," he told BBC Radio Leeds.

"I think I'm doing a great job here if I'm honest and I'm hopeful of bringing a couple more players in this week."

He added: "At my stage of my career you just have to do your best. If other people think there is someone to do the job better then that is [their] prerogative."

The Elland Road side are five points off the play-offs and face bottom side Bristol City, who appointed Sean O'Driscoll as their new boss on Monday, this weekend.

But first Warnock wants to see his side return to winning ways at Birmingham City in their FA Cup third round replay on Tuesday.

Leeds reached the last eight of the League Cup before losing to Chelsea and a home tie against Tottenham awaits if they can beat the struggling Blues.

"We'll have to make a couple of changes but we need to be positive," he continued.

"I want us to have a go because I enjoyed our run in the other cup and I'd like to see us in the next round."