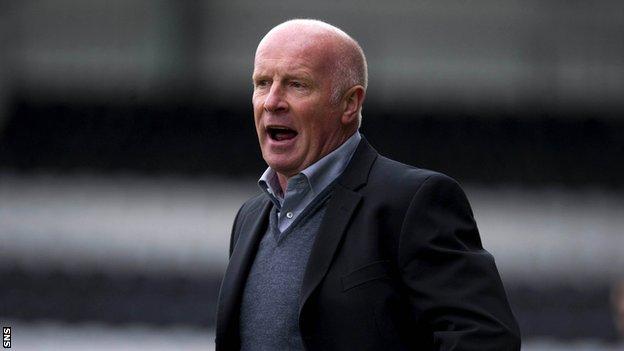 Blackpool have been given permission to speak to Dundee United's Peter Houston regarding their managerial vacancy.

The Seasiders have been searching for a new boss since

The approach for Houston came after

"It's unexpected. I haven't applied for any jobs, but it's a huge compliment to myself that people are even asking," Houston told BBC Scotland.

"It's unexpected. I haven't applied for any jobs.

"Whether it happens or not, it means that your name is being mentioned and that people are recognising the job you're doing."

Houston has been in charge at Tannadice since May 2010, winning the Scottish Cup in his first season with the Scottish Premier League club.

And the former Scotland assistant manager revealed that the prospect of becoming Blackpool manager excited him.

"When I look at their players, they've got a good squad of players and the Championship's a fantastic league," he said.

"It's certainly something that excites me in some way.

However, Houston admitted to a sense of surprise that chairman Stephen Thompson granted Blackpool permission to talk to him.

"There's five months left on my contract and we were still in negotiations over a new contract for me and my backroom staff," he said.

"Every manager has issues with their chairman, because they have to balance budgets and managers want to get in as many players as they can.

"But Mr Thompson and myself's working relationship recently has been fine.

"What he has stated is that he has to make further cutbacks in staff costs.

"Before the contact from Blackpool he did say that he didn't want to hold me back from bettering myself and, if he thinks that, then I'm grateful to him for allowing me to speak to them.

I didn't think I'd be talking like this after two months again, but we'll treat every disappointment as a challenge

Speaking after Blackpool's assistant manager Steve Thompson insisted he was ready to become their permanent manager after again stepping in as caretaker boss.

"I'm as ready as I'll ever be to be a number one," Thompson told BBC Radio Lancashire. "But like anything, whatever role I get, I'll give it my best shot for Blackpool Football Club."

It is the second time that former Bolton and Leicester midfielder Thompson has taken temporary charge this season, having been placed in control of first-team affairs in the aftermath of Ian Holloway's departure to Crystal Palace in November.

On that occasion, he also made clear his desire to

But Thompson lost out to Appleton, who was at the helm for just 65 days before swapping Blackpool for Lancashire neighbours Rovers.

"The players have had the stuffing knocked out of them again this week," said Thompson. "I didn't think I'd be talking like this after two months again, but we'll treat every disappointment as a challenge."