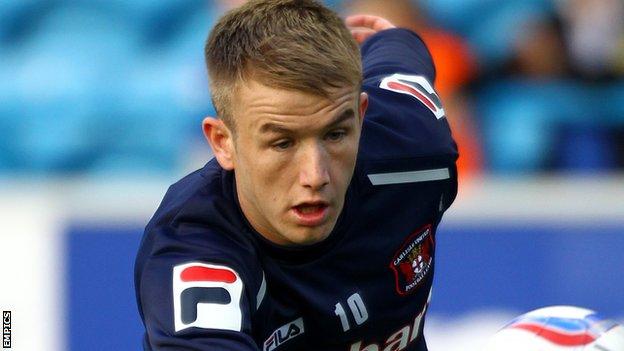 Manager Gary Johnson has praised Paddy Madden and Kevin Dawson after the ex-League of Ireland duo inspired Yeovil to victory over Sheffield United.

Striker Madden and midfielder Dawson, both 22, grew up together in Dublin.

They started alongside each other for the first time for Yeovil on Saturday, and Madden scored both goals in the 2-0 win at Bramall Lane.

"I love them to death and was pleased I could give them the chance to play together," Johnson told BBC Somerset.

"I don't know where they went to school but they must have run 50 miles to school every day because they just keep running."

Madden left Bohemians in 2011 to join Carlisle, but failed to make an impact in Cumbria following a string of injuries.

He was loaned out to Yeovil in October before signing a permanent deal earlier this month, and has now scored 11 goals in 17 games.

Dawson was playing for Shelbourne before joining the Glovers on a short-term contract in January, with his debut coming in the Johnstone's Paint Trophy defeat by Leyton Orient last week.

Yeovil's shock victory over high-flying United moved Gary Johnson's side to within a point of the promotion places in League One.

"We've had to work hard and build our team and we've still got a bit to do," Johnson continued.

"But when you get one or two additions who you know are going to give you everything then that's when you start getting a little bit excited about where you are in the league.

"We certainly weren't going to rest on that defeat the other night [Tuesday] and this is a great one to come back with.

"When we win and we win like that then you're proud of what they've done and what our club has done.

"There's probably some Sheffield United fans saying 'he's gone over the top' but this is a massive club and we've come here and put in a fantastic performance."