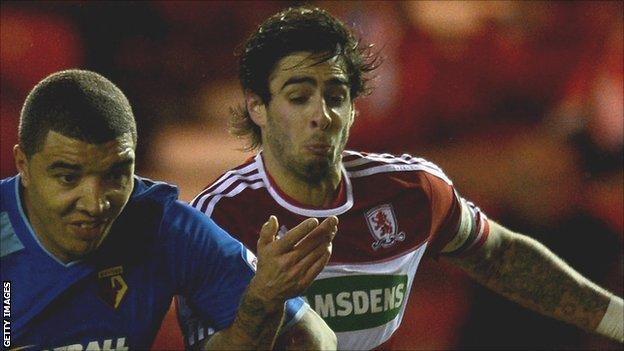 Williams, 24, tried to chest the ball to goalkeeper Jason Steele but Matej Vydra intercepted to score the opener.

"Our defenders had nothing to do in the first half but it's about concentration," Mowbray told BBC Tees.

Middlesbrough have lost their last two league games after a run of four wins in five, while Watford have lost just twice in 13 league matches to climb up to sixth in the table

"Top players don't make mistakes like that, but it's probably cost us the game because of the way they play."

Scott McDonald's last-minute consolation gave Mowbray's side hopes of a last-gasp fightback, but with three minutes added on, the Teessiders ran out of time.

"I don't want to stand here and moan about added time as it seems like sour grapes," Mowbray added.

"The bottom line though is people have to do their jobs. At some games it's 4-0 and they stick five minutes up, why bother?

"And yet today it was a tight game and three minutes seemed very light with the perception of a bit of time-wasting by their goalkeeper."