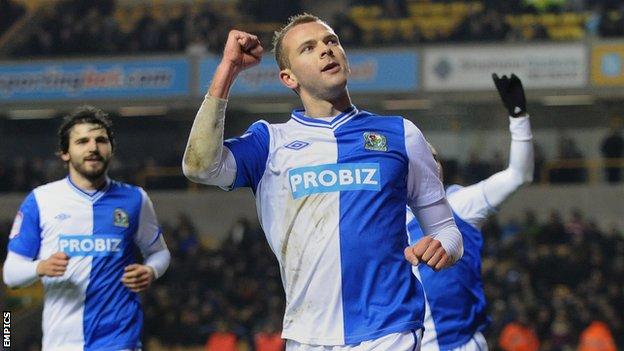 Jordan Rhodes says Blackburn's players want to show new boss Michael Appleton they are worth a place in his team.

Appleton began his role at Ewood Park on Monday and will have a full week to work with the squad before his first game at home to Charlton on Saturday.

Rhodes told BBC Radio Lancashire: "Everyone will have to be right at it in training to impress the manager.

"I'm sure there will be places up for grabs and it's up to us to perform, impress and take the eye."

New Blackburn Rovers manager Michael Appleton will become the ninth boss that Jordan Rhodes has played under since February 2012:

Appleton, 37, left Blackpool to sign a two-and-a-half year deal at Ewood Park and

Top scorer Rhodes, who netted his 14th goal for Rovers in the 1-1 draw at Wolves last Friday, has been a rare bright spot in a season of turmoil for the Lancashire club.

The 22-year-old has scored freely since in August, but his goals have not been enough to save two Blackburn managers, Steve Kean and Henning Berg.

However, after picking up seven points from three league games under caretaker boss Gary Bowyer, as well as progressing to the fourth round of the FA Cup, striker Rhodes says Blackburn will begin the Appleton era in a positive mood.

The Scotland international continued: "It's never easy and credit must go to Gary and Terry [McPhillips] for coming in and helping us out when we really needed it most.

"The squad has really pulled itself together and, in the last two or three games, you can see that when people score a goal or when we're coming off the field at the end, the unity's there. A couple of wins do lift you."