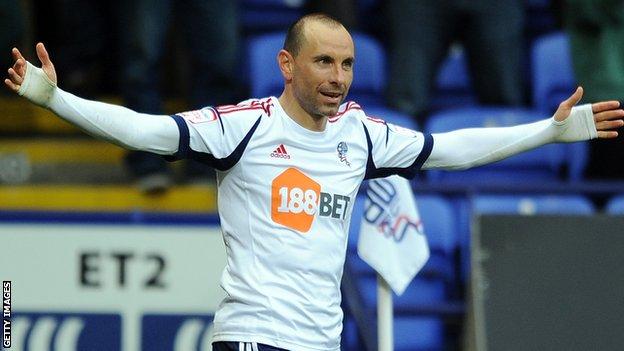 Bolton manager Dougie Freedman says he wants to add younger players to his squad after confirming winger Martin Petrov is set to leave the club.

The Bulgaria international, 33, has held talks with Spanish club Espanyol.

"We've got to face the facts. Martin is in the latter years of his career and earns a lot of money at this club," Freedman said.

"I feel the best thing for the club is to bring in some new, young blood," he told BBC Radio Manchester.

"That's where we are and I hope everybody understands that decision."

Petrov joined Wanderers from Manchester City in the summer of 2010 and has made 85 appearances for the club, scoring 12 goals.

Bolton have made one new signing so far during the January transfer window, with but the 27-year-old was not involved in the on Saturday as Freedman is concerned about his fitness.

"He's not quite where I want him to be yet," said the Bolton boss. "He will possibly be there this week.

"He missed a couple of games for Barnsley and I don't want to throw him in when he's not where I would like him to be."

Asked if more new players would be arriving before the end of the month, the Scot continued: "We've not got lots of money to spend, in terms of going out there and buying who we want to.

"I don't want to put this great club in any sort of financial difficulty. I want to make sure we do it correctly.

"There are one or two things that might happen this week, but I won't be rushed into buying players that I don't feel are right for us in the situation that we find ourselves in at the moment."