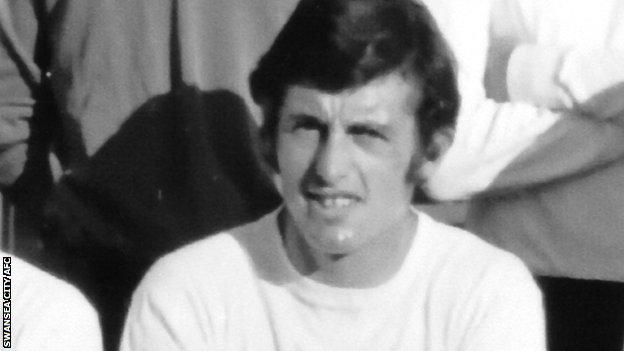 Swansea City are mourning the death of former player Geoff Thomas at the age of 64.

He had captained Swansea Schoolboys en route to the Swans and also spent a brief loan spell at Manchester United.

Following the end of his career he played for Milford in the Welsh League, then North End in the Swansea Senior League.

Thomas took up cricket at Mumbles, where he was also groundsman.

Swansea chairman Huw Jenkins said: "It's always sad to lose a member of the Swans family especially when that person gave so much to the club as a player.

"Having played an incredible 357 league games for the club there's no doubt he was an influential member of the Swans over a number of years.

"He was a well known and loved member of the local community going on to play in the Swansea league when he hung up his boots at the Vetch.

"Our condolences go out to his family and friends."

Close friend John Blyth, of Mumbles Cricket Club, said: "He came to the club after hanging up his football boots and started off playing before taking up the groundsman duties.

"He was a club legend on and off the field, well liked by everybody.

"He will be sorely missed, he's irreplaceable."